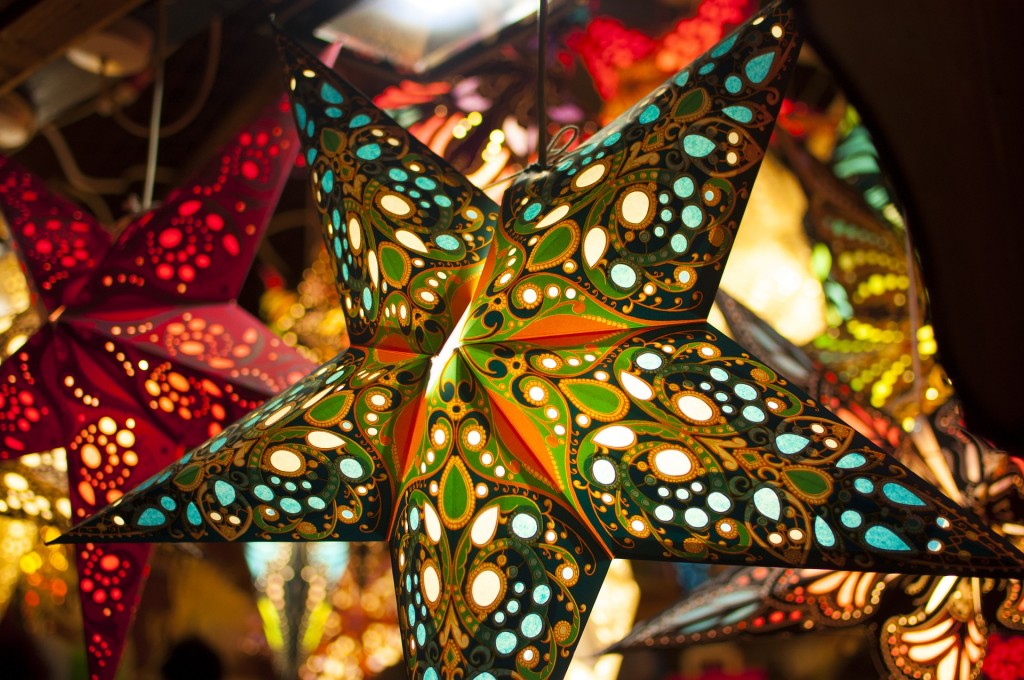 Christmas season in the Philippines begins as early as September. Yes, you read that right! When the “ber” months arrive, so do Christmas displays at the malls, colorful lights on the streets, and Christmas songs on the radio. In late November and in the early days of December, the Christmas rush in the Philippines becomes very apparent in the heavy traffic and crowded malls. But in spite of the rush, Filipinos have the kind of Christmas that shines with love, happiness, and bright colors. Without further ado, I give you the top Christmas traditions that we have in the Philippines:

The Belen is a set of figurines that portrays the Nativity scene. In our house, my family puts the Belen in an altar.

The Parol symbolizes the Star of Bethlehem that directed the three wise men to Jesus’ manger.

The Simbang Gabi is a series of masses for nine days that Catholics devotedly attend at 4:30 in the morning from December 16th to the 24th.

Noche Buena is the meal that Filipino families eat on Christmas Eve, usually after the Christmas Eve mass (for Catholics).

A Filipino Christmas is not complete without a big family reunion where we exchange gifts, eat sumptuous meals, play games, dance, and sing Christmas carols.

Now, to give you a feel of the Filipino way of celebrating the holiday, I’m sharing with you three of my favorite Christmas Station IDs produced by one of the biggest television networks in the Philippines that reflect the Filipino kind of Christmas. These videos feature the country’s talented stars as well as Filipino values and culture. Christmas Station IDs have become a tradition in the Philippines, and I always look forward to them every year. Although the songs are in Filipino (Tagalog), you will still feel the emotions that they express. I hope you like them!

2009 was the year that Typhoon Ondoy (Ketsana) struck the Philippines, and this video gives a very inspirational message: There is hope.

This video shows that Filipinos, no matter where they are in the world, have the best Christmas celebrations.

This video conveys the generous and grateful spirit of Filipinos.

Maligayang Pasko at Manigong Bagong Taon sa inyong lahat! In English: Merry Christmas and a Happy New Year to all of you!