His words hit her unexpectedly, full of accusations and hatred. They brought the insecure girl back to reality, to a world full of deceit and lies. No longer did she feel the comfort she once felt with him. He turned into the boy that did not take care of the girl he claimed he cared about. Instead, he left her crying on her own, with nobody to turn to. Her life was suddenly twisted and disoriented to the point that she did not know where to go. She was sinking, and she could now feel the tip of the rock. The only direction to go when one hits rock bottom is up, or so she hoped. There was a pain in her heart that had seemed to worsen as time went on. Her heart was painfully exhausted after having been stepped on by boy after boy. She wanted to be strong and become the girl she always dreamed of, but she was tired. Her legs felt like twigs being thrown into a bonfire, on their way to meet the ashes of her heart. The fire grew rapidly, feeding on the lies that he spit in her face. Soon, her insecurities engulfed her, a reminder of her being too afraid to ask for help. Would anybody help anyway? She longed for the comfort of a friend, somebody who would be there for her no matter what. Instead, she felt the weight upon her own shoulders. Exhaustion took over her body until she could no longer carry the baggage. The idea of what a man could do to her heart left her scared and lonely. She felt weak and undervalued, but he refused to listen to her despair. Her silent calls for help were written all over her body, yet he refused to take notice. Instead, he shot names at her, waiting for her to break. His kindness turned to a type of evil that she had never seen before. The words kept pouring out of his mouth, leaving her feeling helpless and inferior. Love was not a joke; it is a door that is always open but nobody seems to walk through it. They slam the door in front of you, so you feel it shake under your cold, bare feet. This boy was exactly like the rest she had encountered, cold and ruthless. What made him different was the fact that they had been friends for many years, but now he was breaking her heart. She was tired of the accusatory tone and language; all she wanted was to fall into the comfort of sleep and never wake up. He saw the pain in her eyes, she was sure of it, he just did not care anymore. Or, she thought, maybe he never did. As she stared at the bright screen full of ignorance, her eyes filled until they could hold no more weight. Tears stained her once bright cheeks, leaving scars that would never leave. She felt the imprint of his hand on her back where he once gently touched her, but the tears were a reminder that he was no longer there for her. A best friend can turn into a stranger in very little time. She reread his texts, a huge mistake, as she sat alone in her bed, breaking. He blamed everything on her, when all she wanted was for somebody to hear her. She was done letting everybody walk all over her. It was only time before she faced another boy full of arrogance and lies. This was her chance to learn how to handle the situation. The thought of gaining control gave her a slight sense of hope, but it was enough for the time being. She wiped the tears from her face, unable to wipe away the scars. Shaking, she scrolled back to the bottom of the texts and wrote, “I’m done.” A smile spread slowly across her face as she felt joy for the first time in months. She was a girl that felt the struggle of being quiet and independent. Her chance has come to prove that she is so much more than what everyone makes her out to be. I know that girl; that girl is me. 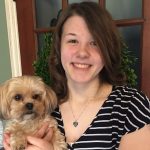 Makensy Pletcher is a 15-year-old student in Lancaster, Pennsylvania. It has been a dream of hers to have a piece of her own posted on the Germ site. One day she hopes to publish a novel that will touch the lives of teenage girls. She has been writing for as long as she can remember and have been blessed with many people who have guided her toward her goal. As much as she loves writing, she longs to become an accomplished veterinarian and have writing as her side job. She feels as though writing is her way to make a difference in the world, and if she changes even one life, she will feel that she has met her goal. Jennifer Niven has inspired her to be the best she can be through her writing.