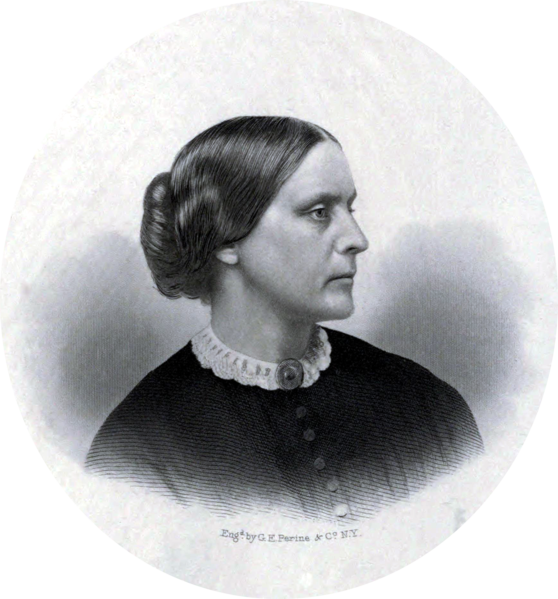 Susan B. Anthony was arrested for illegally voting in the 1872 presidential election. At her trial, she insisted that it was her constitutional right as a United States citizen to vote. She was found guilty and was fined $100, which she refused to pay.

Anthony was a successful teacher who left the profession and became politically active instead. She was close friends with the suffragist leader Elizabeth Cady Stanton. Together with other suffragists, they formed the National Woman Suffrage Association and wrote History of Woman Suffrage, documenting the struggle for women’s voting equality. Before 1860 and the efforts of crusaders like Anthony, married women did not have any control over their earnings or property. They could not sign contracts or be the legal guardians of their own children.

Unlike Stanton, Anthony never married, which made her more subject to criticism from the press. Ridicule never changed Anthony’s resolve. She worked tirelessly, canvassing door-to-door for signatures on petitions and giving impassioned lectures across the country. On her last birthday, at 86 years old, she still firmly declared, “Failure is impossible.” Her determined profile was printed on a dollar coin in 1979.

The Nineteenth Amendment, giving women the right to vote, was passed in 1920, fourteen years after Anthony’s death. It was nicknamed the Susan B. Anthony Amendment to honor Anthony’s lifelong devotion to women’s suffrage.

Depicted in profile,
wearing a white lace collar,
with her dark hair coiled
at the back of her head,
she looks as if she is
stubbornly facing away
from the world as it was,
to focus instead
on a future imagined,
where a woman could vote
for those who governed her,
without being arrested.

“Failure is impossible,”
Susan B. Anthony declared
on her 86th birthday,
after 50 plus years
of speeches and petitions.

Her passion flew
from ear to ear
like a persistent fly,
heedless of the swatter,
as long as there was hope
to be heard.