The other day my daughter, McKaelen, came home from dinner with friends, and she had leftovers with her. She asked her father and me if we wanted them.

“What kind of leftovers did you bring home?” I asked.

To most people a conversation like this would mean nothing — just another day in the life of a normal family — but to my husband and me, hearing that our teen daughter had gone out and ordered that food brought on so many emotions.

And I’ll tell you why.

McKaelen, who is almost eighteen, struggled for fifteen years with the eating disorder ARFID, Avoidant/Restrictive Food Intake Disorder. People who have ARFID (which is recognized in the DSM-5 of mental disorders) fear unfamiliar foods and stick to a very limited menu of what they deem their “safe” foods. This is what McKaelen did for the first fifteen years of her life, only eating a basic menu: bagels, pizza with no cheese, plain bread, raw carrots, apples with no skin, peanut butter, waffles, Goldfish, and snack foods. And that was about it for her food intake. We were lucky that she would drink Carnation Instant milk because she got very limited protein and iron in her diet. She never ate meat, and the only fruits and vegetables in her diet were the few apples and carrots she would have occasionally.

The thing with ARFID is that for some people, like McKaelen, you can’t tell that there’s anything wrong. She looked healthy. She was growing normally. When I told her doctor that she wasn’t eating right, he would always say she was just “picky” and that she would grow out of it, like all “picky” kids do. But I knew that something wasn’t right. I continued to take her to different doctors—nutritionists, therapists, anyone I could find to try to get to the bottom of her different eating; but, at the time, there was no name for ARFID. We were going round and round in circles.

Another big problem with ARFID, besides the refusal and fear of trying new foods, is the anxiety and depression that comes along with it. As McKaelen grew into her teen years, these problems escalated. Her friends started going out more and being more social—having sleepovers and parties, going to restaurants, doing things where food was a central part of the event. This brought a lot of stress into my daughter’s life and caused her to withdraw. Some people with ARFID can become extremely reclusive, isolating themselves; some even self-harm and consider suicide.

Finally, FINALLY, after years of doctors, worry, and treatments that didn’t work, I found an eating disorder center and took McKaelen for an evaluation. After we explained what was going on, the woman simply looked us in the eyes and told us that McKaelen was suffering from ARFID. We had never heard of it before. It was a revelation to know there was a name for what was going on and that there was treatment available.

McKaelen began a 20-week, intensive outpatient therapy program that involved peer group therapy, working with a nutritionist, somatic experience therapy, and also working one on one with a therapist. She learned coping skills, how to be comfortable around food, and, eventually, how to learn not to fear food any longer.

The first time that I sat across from her at a restaurant and she ordered a food that was not one of her safe foods — and she ate it and enjoyed it — I wanted to cry. It was better than watching her walk for the first time as a baby. To watch as my child learned to be comfortable and safe around food, and to see her conquer her eating disorder, has been a journey like no other.

Since we went through fifteen years of not knowing what ARFID was, it’s our goal to share McKaelen’s story to spread awareness about this disorder. There are so many doctors who are mistaking it for simply picky eating when children are suffering, when parents may be forcing kids or bribing them to eat foods they are truly incapable of eating. More education needs to happen. More doctors need to learn about this disorder and how to treat it so children don’t have to go through what my daughter did.

Sad Perfect, the young adult novel I wrote while McKaelen was in therapy, is loosely based on my daughter’s experience. It is about a girl with ARFID who battles this very real eating disorder. It’s her journey to discover how she can recover. It’s my hope that teens and adults will pick it up and learn a little bit more about this lesser-known eating disorder that, unfortunately, a lot of people either have or know someone who has it.

For sixteen-year-old Pea, eating has always been difficult. Some people might call her a picky eater, but she knows it’s more than that, and it’s getting worse. And now there’s a monster raging inside of her, one that controls more than just her eating disorder. The monster is growing and causing anxiety, depression, and dangerous thoughts. When Pea meets Ben and they fall crazy-mad in love, she tries to keep the monster hidden. But the monster wants out, and as much as she tries, she can’t pretend that the bad in her doesn’t exist. Unable to control herself, a chain of events thrusts Pea into a situation she never imagined she’d find herself in. With the help of Ben, her family, and her best friend, Pea must find the inner strength to understand that her eating disorder doesn’t have to control her. 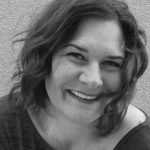 Stephanie Elliot is the author of the young adult novel Sad Perfect, which was inspired by her own daughter’s journey with ARFID, Avoidant/Restrictive Food Intake Disorder. She has written for a variety of websites and magazines and is a book reviewer, a parenting columnist, and an editor. She lives in Scottsdale, Arizona, with her husband and their three children.