I was 23 years old when I got my first writing break. A college friend was working for the editor who’d acquired rights for famed Olympic gymnastics’ coach Bela Karolyi’s autobiography. I wrote a proposal, and my friend put it in a pile with the other potential writers. A few weeks later, Bela called and invited me to his ranch in Texas.

My first mistake was showing up in a skirt. I was trying to impress by dressing the way I thought an author dressed. Bela asked if I’d brought jeans. Luckily, I’m a jeans kind of gal and had a pair. We spent the next three days eating in the cabin Bela had built himself, playing with his collection of animals, and driving ATVs around his enormous property. When we’d get to a gnarly ravine, Bela would plow ahead then turn around and tell me: “You can do it!” as if I was one of his little gymnasts. His encouragement gave me wings, and each time I succeeded.

At the end of the weekend Bela drove me to the airport. We still hadn’t discussed his book. When I asked, he shocked me by saying I was hired. “Why?” I blurted. “I’ve worked as a writer for a circus and a graduate school, but I have never written a book.” Bela told me that when he lived in Romania, he’d travel to elementary schools to scout for gymnasts. He never picked the one who could do the best cartwheels. He picked the girl in the back of the crowd who was working the hardest to get his attention. One of those girls was Nadia Comaneci. Bela said that because I was young and unproven, I’d work harder than anyone else to write a great book. He was right.

When it was time to interview with Julie Krone, famed jockey, for the chance to write her autobiography, I showed up in jeans, a flannel shirt, and my Converse sneaks. She told me the minute she saw me walking up her drive she knew I was the writer for her because I’d shown up as myself. Thanks, Bela! Julie had just been through a horrific accident. She’d fallen from her horse during a race, but her foot had remained in the stirrup. Julie rotated 360 degrees, but her foot didn’t, destroying the ankle joint. In addition, she’d been struck in the chest by the horse racing behind her, leaving her with a cardiac contusion.

Julie’s ankle was rebuilt using 14 pins, and the pain was agonizing, but she was determined to return to the saddle. As one of the only successful female jockeys at the time, she’d had to battle her way into that boys’ club and hadn’t stopped until she’d won a Triple Crown race and reached the top of her profession. She wasn’t going to let an injury derail her. Julie taught me about tenacity and bucking the system, but she also touched my life on a more personal level.

I was in my mid-twenties and trying but failing to get over a romantic relationship. “How long since the breakup?” Julie asked.  I told her it had been months. She took my hands, looked me in the eye, and very sweetly said, “Oh, Nancy, you have to toughen up or life is going to suck. Decide to get over it now.” This from a young woman who’d been bullied by male riders, felt the sting of their whips as they attempted to shove her out of races, and suffered through countless injuries. I decided to get over the break-up “now” and never looked back.

Tennis player Monica Seles taught me a different kind of lesson. I was hired to co-write her autobiography a year after she’d been attacked on the tennis court by a fanatic fan of Steffi Graf’s. The man, Guenter Parche, stabbed Monica (who was ranked number one in the world) in the back during a changeover in a match in an effort to return Graf to the top ranked position. Parche was later convicted of the stabbing in a German court but given a suspended two-year sentence.

The message from that verdict was that someone could stab another person with the intention of seriously harming if not killing them and then walk away a free man. At age 19, Monica had to accept that sometimes there isn’t justice and life is unfair. As a result of the attack, which damaged Monica more psychologically than physically, she stayed out of the game for two years, lost her number one ranking, countless millions, and ultimately her career. Eventually, Monica would regain control over her life, appear on television shows, write several more books, and find love and marriage. But watching her struggles after the attack taught me that adversity doesn’t pick favorites.

Nadia Comaneci knows about adversity. Raised in Communist Romania during the brutal regime of Nicolae Ceausescu, Nadia was hand-picked by famed gymnastics’ coach Bela Karolyi and trained to become an Olympic champion. Watching her perform, she was the picture of grace and athleticism, and it was hard to imagine anything but a perfect 10 life. Sadly, that wasn’t true.

When I met Nadia to help her write Letters to a Young Gymnast, she was living in Oklahoma with her husband, former American gymnast Bart Conner. She’d defected from Romania, fleeing over the border to Hungary, then on to Austria, and finally New York. In making the decision to defect, she left behind a family she might never see again and had to live with the knowledge that they could be imprisoned for her actions. What struck me about Nadia was that a life filled with the fear of being listened to, followed, and of retributions from the secret police had made her careful with her emotions. Every relationship she formed, each person she trusted, was her attempt to claim what had been denied: the freedom to choose her life and loves and to show her emotions. Her bravery was a lesson in what can be overcome with time and Herculean effort.

Every elite athlete I’ve worked with has one similarity. True champions, whether they’re Monica, Julie, or Nadia, fight for themselves and their passions. They rise despite the circumstances. I’m grateful for what I learned from each of them, and I hope some of their determination has rubbed off on me. Sometimes I still hear Bela whisper, you can do it, and I feel a surge of confidence and am thankful for the encouragement. 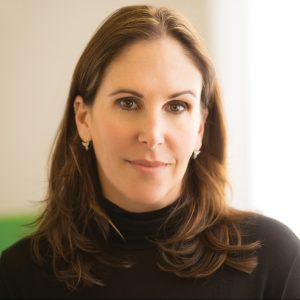 Nancy Richardson Fischer is the author of The Speed of Falling Objects (HarperCollins/ Inkyard Press, Oct. 1st, 2019). When their small plane crashes in the Amazon, a young woman, her TV survivalist father, and a teen movie idol must face deadly perils and dark secrets to survive and find their way home. 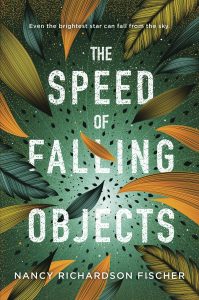