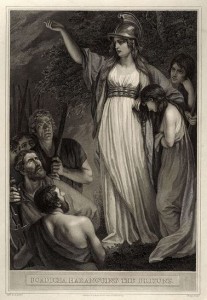 Hello, Germ readers, and welcome back to another installment of Badass Ladies in History! It wouldn’t be back-to-school season if we didn’t help you all brush up on some badass history, courtesy of our next awesome and ruthless lady, coming all the way from Britain in early AD. Not much is known about the early years of Boudica, queen of the Iceni tribe. What we know of her comes to us from two Roman historians, Tacitus and Cassius Dio, who wrote of the warrior queen and her revengeful tirade across British lands while it was under Roman rule around AD 60 or 61.

You know that small little hiccup in history when Rome decided to conquer all of the land they could and continued to do so up until its fall in the late AD 400s? This is where we set the scene for our badass lady, whose early life, for the most part, remains shrouded in mystery.

Historians ballpark her birth around AD 25. According to Dio, Boudica was said to have been tall with tawny hair hanging below the waist, with a rough voice and piercing eyes. Both Tacitus and Dio agree that she was of royal descent, and she eventually married into the royal Iceni family. Prasutagus, her husband, was the king of the Iceni people, so Boudica became their queen; the Iceni merely adopted the term “king,” so Prasutagus was more of an “elected chief” to the Iceni rather than king. At this time, Rome had not yet conquered Iceni land (which in present times would’ve been Norfolk and parts of Suffolk), but it was only a matter of time until the Romans would strike.

The time eventually came when Prasutagus died. His last wishes were to leave his kingdom to be shared between his two daughters, his wife, and the new Roman emperor, Nero, hoping that the Romans would respect his wishes and bring about a peaceful settlement between the Romans and the Iceni royal family.

That — you guessed it, folks — is not what ended up happening. But, more power to you, Prasutagus, for your wishful thinking.

Instead this is what happened:

Per Roman law, the Romans did not believe that daughters and wives (i.e. women) could rightfully inherit royal titles — or a kingdom, for that matter. So, the Romans decided that Prasutagus’ last wishes should be ignored, and they instead annexed the kingdom and brought it under Roman rule. Oh, Rome. Could you be any more predictable?

After the utter humiliation and trauma that Boudica and her children experienced by Roman rule, her tribe took in Boudica and the girls — the tribe still believing her to be their natural leader despite the Roman’s saying she was not a legitimate successor. The neighboring tribes, who were also very anti-Rome at this point, were very much willing to support an uprising if Boudica was game to do so.

Around AD 56 and 60, the Romans — in a very jerk move — decided to erect a temple to Claudius in order to commemorate the life of the Roman Empire’s most popular emperor — the emperor responsible for destroying much of the Celtic culture. To the natives of that land, the temple was a big fat slap in the face, and it didn’t help that the Romans had attacked the main headquarters of the Druidic religion: the Island of Mona, a sanctuary for refugees and an important religious center for the Druids. The sanctuary was attacked by Roman forces, and they swiftly slaughtered the inhabitants and cut down their sacred groves of trees.

Feeling incredibly disrespected, the neighboring tribes as well as the Iceni people were brought together under Boudica’s leadership in order to ambush and attack the Romans occupying their lands. The final count of the rebellion against Rome was around 100,000 tribes people; although, Dio exaggerates the number at 230,000 when he writes about the rebellion. Boudica and her group of rebels were incredibly successful at the beginning of their rebellion due to the fact that Roman hubris was pathetically large. The Romans had unwarranted, preconceived notions of the barbarians, believing they were not up to snuff when it came to warfare.

What they didn’t take into account was that these “barbarians” were experts at small-scale guerilla warfare. Slipping quietly into the night under the cover of the tree-laden forest, Boudica’s rebellion was able to attack the Roman cities of Camulodunum and Colchester and then move on to the trade center of Londinium (the precursor to London).

The carnage that they left in their wake, along with the looting and burning of the cities, was enough to grab the Romans’ attention. Tacitus believes that Boudica and her army left around 70,000 civilian casualties, and the way the Celts gave thanks for their victory was incredibly brutal and savage. The success of Boudica’s army truly shook up the Roman leaders, so much so that Emperor Nero even considered withdrawing all Roman forces from Britain.

The tactic of surprise could only be used for so long, though, until the Romans caught on to how the warriors were able to successfully attack the cities. So, in Boudica’s final battle, the Romans, under the leadership of Suetonius, finally had the upper hand with more manpower and better armor; the Celtic army, on the other hand, wore little to no armor. The Romans’ shorter swords were also more effective in close quarters than the Celts’ longer swords, which were rendered useless.

Historians don’t know for certain if Boudica died in battle, but legend says that Boudica feared capture and fled back to her kingdom, where she ended her life by drinking poison.

Boudica’s story was lost throughout the Middle Ages until the English Renaissance. Queen Victoria, most notably, took a great interest in the story, seeing as Boudica’s and Victoria’s names have the same meaning: “victory.”

Today, Boudica is renowned as one of Britain’s most badass warrior heroines. To commemorate her bravery, Queen Victoria and Prince Albert encouraged English sculptor Thomas Thornycroft to erect a statue of Boudica and her daughters in her war chariot.

Her story, although ending in defeat, is not one that discourages those who come across it. Instead, those who know of it are kept in awe because of Boudica’s ability to influence, persuade, and embolden her people in the face of what they viewed as The Big Bad. Her ability to take the tragedy of her life and turn it into a bold and brave act of vengeance truly is an amazing story that should be shared and respected by everyone who comes across it.

So, three cheers to Boudica, our Celtic warrior queen! Her story may have ended in defeat, but her legacy surely does not.