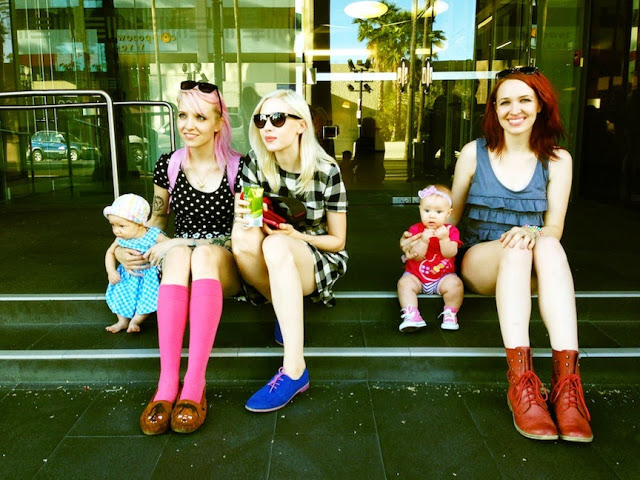 When I think of what exemplifies love, family, and music, I think of the DuPree family. If you haven’t heard of them, fire up your iTunes when you’re done reading this. The DuPrees are the members of Eisley, a band I have listened to since the early 2000’s when I was in high school. And they’re still making gorgeous music today. Eisley consists of siblings Sherri, Stacy, Chauntelle, and Weston DuPree, and their cousin Garron DuPree. They’re from Tyler, Texas, and their music style is best described as indie rock. (However, I think their versatile melodies transcend genre, especially in their newer, more mature albums.)

This family began creating music together when the youngest members were only 10 and 8 years old! Their father was their manager, and they played small gigs at a venue their parents owned inside a church. From there they, well, kind of exploded.

As a teenager, I made sure I saw them when they toured in Denver, and I still have t-shirts from those shows.

Back then, I loved them for their music. But now that social media has expanded to what it is, I can say that I also love the DuPrees for the kind of people that they are. I follow all of the members on Instagram, Twitter, and Vine. The rockin’ teenage siblings I grew up with are now incredible men and women with families of their own, and their music is still going strong.

I scroll through their Instagram feeds enviously, vicariously living their awesome lives. Sherri is married to Max Bemis, the frontman of the band Say Anything, Stacy married Darren King of the band MuteMath, and Chauntelle is married to Todd D’Agostino, owner of LaRose Guitars. All of the couples are ridiculously cute.

The youngest DuPree kids, Christie and Collin, are not part of Eisley, but have their own duo, Merriment. Merriment has a sound very similar to Eisley, but with their own folksy twist.

The coolest thing about the DuPrees lately? Stacy, Chauntelle, Sherri, and Weston’s wife Jessie all recently had babies around the same time. Three girls and one boy in that mix. (Can you say Eisley: The Next Generation?!) Not only are these adorable toddlers now Vine and Instagram famous, but they get the amazing opportunity of accompanying their talented parents on tour! What a life.

Following this lovely family that I’ve never met so closely on social media may make me a little too much of a “fangirl,” I know. But I can’t help but be drawn to them. In a world where so many musicians are drama bombs and scandals ready to explode, the DuPrees have such a genuine love for each other and their music. The quality of their albums is consistent, and their amazing attitude has to be behind that.

I’ve only been able to see Eisley a couple of times live, but both times were unforgettable. Their chemistry onstage is real and heartwarming. I can’t imagine being in a band with my siblings. I think we’d pull each other’s hair out, but these guys have it down. They’re sweet to each other on stage, they have fun, and they sing beautifully.

They are, at least to an outsider like me, the perfect picture of what a family should be.

I titled this article “Better Love,” after a song from Eisley’s album The Valley. While I highly recommend listening to the song and buying that album (heck, every album!), what I also want is to encourage all of you to love your family better. When I see photos or updates from the DuPrees, I want to be a better daughter, a better sister. I don’t know the DuPrees personally, but I hope they know how awesome of an influence they are in how they love. Keep it up, Eisley!