I spent my weekends in Brooklyn with Dad, where he had an apartment near a Hasidic neighborhood. It was a couple of blocks away from a stretch of benched sidewalks where men would gather in their black garbs and tall hats, long beards prickling down as far as their length would allow.

It was nice driving by them on a Saturday afternoon with the windows of Dad’s black SUV rolled all the way down. I could feel the wind in my face and fleetingly watch these men as we drove by, all of them going about their Saturday in the only way they seemed to know how; congregated together in groups on the streets of their Brooklyn neighborhood.

We would pass them, Dad cutting the corner with the SUV’s back wheel, and he always managed to find a spot on the block of his building. That was the amazing thing about him; he would make sloppy turns in his sloppy car wearing his sloppy (possibly day old) outfit, but he somehow always managed to achieve the near-impossible. On-street parking in New York City.

I didn’t have to unpack my things once we walked into his place, simply because there was nowhere to unpack them. His small apartment housed only one bedroom, his bedroom, so I kept my clothes and toiletries that I brought along with me from Long Island in my Jansport until I needed something. I didn’t even have a toothbrush in his bathroom, so I brought that from home too.

I told myself that it wasn’t because Dad didn’t want me there. That wasn’t the reason I didn’t have my own bed to sleep in or a toothbrush I could leave in the bathroom or a drawer in his dresser for my clothes. He just didn’t have enough space. Dad was trying; that’s the mantra I repeated to myself constantly, under my breath, inside my mind.

Sometimes there were ants in the bathroom sink and there were always dirty dishes in the kitchen, but he was trying.

I never mentioned the toothbrush or the ants or the dishes to Mom when she called; I knew she would demand to speak to Dad, chastise him. That she would tell me other fathers didn’t behave in such ways, that they made sure their daughters had their own bedrooms, their own toothbrush. And I didn’t want that. Because for some strange reason I was ashamed of the whole thing.

So I didn’t confess to Mom or complain to Dad. Even thirteen-year-old me could see he was struggling and didn’t have enough room for me there, but if I tried really hard and didn’t take up too much space, he would realize I was just the right size to fit into his Brooklyn life.

He tried so hard that he even made friends with other tenants in the building. There was Ray, who had a daughter and stayed with him on the weekends just like I did. And there was the couple that Dad simply referred to as The Russians, which consisted of a blond woman named Oxana and her husband who didn’t speak very much and always seemed to be drinking out of a water bottle that he carried around with him.

It made me feel good that he had them, but sometimes I was alone for stretches of time while Dad went out for a new pack of cigarettes or to hang around on the roof with Ray and Oxana and her husband; I’m sure his water bottle was there, as well as other bottles of the spirit variety.

I had never been on the roof before, but I made a picture in my mind of what I thought it might look like. I saw the flat concrete expanse, a perfect square, the metal piping jutting up the sides of the brick building. I saw the ledge that bordered the roof, one that I decided would reach up to about their knees so that they couldn’t accidentally fall over and splat all over the sidewalk.

There was one weekend when they were all on that roof and I could hear their laughter from the open window in Dad’s bedroom. I knew their ruckus was drunken, even before the plane flew overhead and they all yelled up to it, as if the pilot and all of the passengers on-board could hear their proclamations.

“Heil Hitler!” they exclaimed stupidly, nothing more than voices to me which echoed down, filtering through the window along with the breeze that carried their drunkenness, and I imagined them saluting to each other the way the Nazis did in grainy black and white footage from World War II.

I tried to block it out, looked down at my book — a classic that I was reading for the first time, set in the same city I was currently in. Brooklyn wasn’t my city, and it wasn’t really Dad’s either, but I guess we both pretended it was. In A Tree Grows in Brooklyn, the city was new and fresh, and Francie Nolan got to sit out on a fire escape and witness the real magic of it, and I couldn’t help but wish that I was a part of that version she described.

The one where no planes flew by and no one drunkenly saluted dictators or had to deal with ants infesting the bathroom sink or weird men who always held tightly onto water bottles.

I looked outside and there were no kids on the street. I didn’t know where Ray’s daughter was while he was up on the roof. Maybe doing the same thing I was, but I doubted it. Most kids didn’t like to read the way I did.

I passed the day that way, until the sky started to turn pink and the noise from the roof stopped, and I heard voices in the hallway and saw Dad and Oxana kiss each other through the peep hole, even though she was married to the guy who carried the water bottle and Dad’s girlfriend that he used to live with was coming over for dinner later that night.

I backed away from the door, and when Dad came in I didn’t say anything about what I’d seen.

I went to the supermarket up the street with him and held his hand when we walked even though I was way too old to be doing that anymore. I helped him cook meatballs when we got back and watched him put dirty plate after dirty plate in the sink. I fed Leo, the black cat that Dad had gotten for me, scraps of bacon leftover from that morning that hadn’t been cleaned off of a plate on the kitchen counter.

Soon Dad’s girlfriend came with her German Shepard, Bella, in tow on a long pink leash. Maria’s name wasn’t actually Maria, and I’m not sure how I got away with calling her that, but her real name was Peruvian and hard to pronounce, so I made my own name for her.

The two animals had never met before, and as I held Leo near Bella, he leapt out of my arms, claws sharp and extended outwards. It was all so quick, a blurred ball of midnight black fur. The dog growled and the cat let out a high pitched cry and flew not towards Bella but somehow at Maria who was standing right there. The wrong place at the wrong time.

Her face bled from angry red scratches that I knew would turn into ugly, textured welts before they healed; it needed to get better before it got worse. And in that moment, blood running down her face and Dad standing there in the doorway of the kitchen, momentarily stunned, I thought of what I saw from the peep hole. Blond Oxana and drunk Dad and how I would never say anything about it. How Maria would never know.

I thought of Heil Hitler and roaring planes flying over Brooklyn and stray bacon bits that were probably clinging to the carpet and water bottles with clear liquid that wasn’t really water no matter how hard it tried to be. I thought all of this as I rushed into the bathroom and grabbed a dingy wash cloth that Maria could wipe her face with.

When I looked down to turn on the faucet, I saw at least a dozen ants crawling inside of the sink. 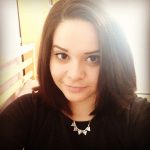 Nicole Vetrano is a writer of creative nonfiction who lives in New York.