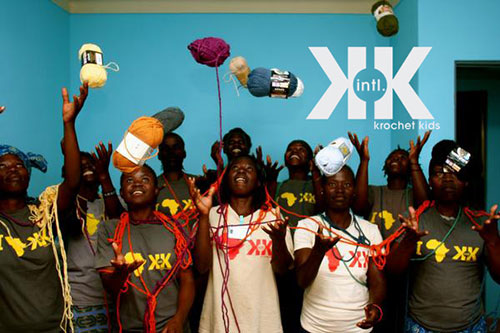 Akello Susan of Uganda hasn’t had an easy life. Orphaned at three, she spent her childhood under the guardianship of her struggling grandmother who had to raise many other orphans as well. As she got older, she had to eventually drop out of school because they did not have the money to pay for it. Food was scarce, and work was difficult to come by. War had driven her and her family to move again and again. She is now a widow with six children of her own, but things have since changed for Susan, and her life has been changed for the better. She now has a steady job and the funds to take care of her children.

Julia Gonzales had to quit working when her daughter became ill. Without an income, supporting her family became increasingly difficult. But she, too, experienced a change. She is now able to take care of her children and support them with the money she earns from her job. Things are looking up for Gonzales and her children.

An organization called Krochet Kids is responsible for turning the lives of these women and the lives of many more completely around. The organization teaches women in Uganda and Peru how to crochet, and the products they make are exported and sold. The money then goes right back to the women for them to support themselves and their families. In addition to an income, Krochet Kids also provides these women with education and mentorship to help them make a better life for themselves and those around them.

Krochet Kids was founded by Kohl Crecelius, Stewart Ramsey, and Travis Hartanov. In high school, these three would crotchet together, selling what they made to raise money for their prom. Although they all went to different colleges, they remained friends, and all of them spent their summers in less-developed countries in an effort to gain more global understanding. Ramsey spent one of these summers in Uganda, where he discovered how desperate the people there were to find work. A year later the three traveled back to Uganda, and Krochet Kids came into existence.

The organization has grown since then, now having 15 times more women working with them than when they began. They also started working in Peru, transforming the lives of many of the people there.

The results of Krochet Kids are astounding. The income of these women is ten times larger than it was previously, and they are five times more likely to have healthcare, which then results in healthier families. Physical abuse in the household has decreased by 40%, and gender equality has increased. The children of these women are also much more likely to go to school.

Their products are available online, but they can also be found in certain stores, such as Urban Outfitters and Whole Foods. You can find other locations that sell their products near you on the Krochet Kids website.

Crecelius, Ramsey, and Hartanov found a way to use their hobby to make a positive difference in the global community. Their story is such an inspiration and a reminder that there are many different ways we can change the world.