May 7, 2016May 6, 2016 by Germ Magazine guest author
The following monologue is an excerpt from Hannah Horton’s screenplay.
_
Screenplay Summary: After three years, five months, and nine days of giving the silent treatment to her brothers, faking a severe injury, and other unusual events, Fran Flowers — a girl with undiagnosed Histrionic personality disorder — does everything in her power to be the absolute center of attention. The screenplay begins the first day Fran talks to her brothers again. The day is filled with complete chaos, her brothers thinking she is dying, and Fran concluding to even more obscure ways to gain attention.
.‾‾‾‾‾‾‾‾‾‾‾‾‾‾‾
‾‾‾‾‾‾‾‾‾‾‾‾‾‾‾‾‾‾‾‾‾‾‾‾‾‾‾‾‾‾‾‾‾‾‾‾‾‾‾‾‾‾‾‾‾‾‾‾‾‾‾‾‾‾‾‾‾‾‾‾‾‾‾‾‾‾‾‾‾‾‾‾‾‾‾‾‾‾‾‾‾‾‾‾‾‾‾‾‾‾‾‾‾‾
Yes, one thousand, two hundred, fifty seven days is how long I had gone without speaking to my brothers. Impressive, right? I know. I could have gone even longer if I wanted to, but that wasn’t part of my plan. Why did I do it, you may ask? I could act as if there are many reasons I did not speak to my brothers for that long. Act in the way most do to cover up any seemingly psychotic crime by making up logistical excuses. I could do that. I could say, “Oh I was mad at my brothers,” or, “It was just a bet and I like winning,” or maybe, “It was a cleanse. I’m really into these trendy mind cleanses to make you more sane and it was really helpful for me.” That last one was actually pathetic. I did not do it for any of those reasons. My reason is much more simple, simple yet somewhat frowned upon. For every year I have elegantly strided through this planet, there has been one thing I ever so greatly crave: attention. The look of disgust, confusion, or surprise towards my eyes makes my body feel an uttermost sense of relief. I can feel my stressors ooze through my pores when I receive second takes by those in disbelief of some extremity in which I have just caused. Each day I wake up eager to perform some sort of behavior that will catch the eyes of anyone willing to look over at me.

Beginning with odd stunts purposely resulting in kindergarten me getting to have casts for a few months, my obsession with attention has now skyrocketed into the meticulous planning of every single aspect of my life in order to get the perfect attention in any situation. Just last Tuesday I gave myself a swirly during school and blamed Sienna, this girl who acts as if I don’t exist, on it. Now every time I see her in the hallways she looks over at me, scrunching her eyes and growling under her breath. I went from having absolutely no infliction upon her life to being the subject matter of her every conversation to her “mommy” after school. I have to admit, it was brilliant, but I am far more brilliant than that. The extent of my attention-seeking capabilities surpasses the majority of anyone in attempt to gain attention due to my nonexistent fear of consequences. A trip to the principal’s? Now that’s a treat! The thing is, any sort of trouble in which I am bound to get in, I’ve already plotted my way out of.

With lists scheduling out my every move from the time I get out of bed until the time I get back in, and sometimes even further, life could tend to seem a little tightly wound. Don’t get me wrong, my life is tightly wound, but I have been able to make holes in my schedule to also live in the moment — because sometimes the best ways to get those second looks is through improvisation. The time I squirt hand sanitizer in my eyes right before a math test is a pretty good example of that. That caused so much controversy my math test got moved to the next day. Talk about my skills on being a walking billboard for myself! Around my school, I am practically famous. Actually, I am famous. With thousands of “What did Fran Flowers do today?” posts on Twitter, I’ve gotten the vibe that I’ve always got someone’s eyes on me — how calming!

The struggle is, I want more. I want the whole world’s eyes on me — people to think I’m crazy! I want my name on the front of every magazine with titles inventing new ways to be absolutely insane. “Did you hear about that girl who climbed up and stood on top of the empire state building singing the National Anthem in perfect tune?” I want that to be me. Let me paint a picture for you. Fran Flowers, the girl who can do seemingly anything, make it out alive, and also look super stunning while doing so. I want to be known for inventive fashion styles, the oddest most intriguing schemes you have ever heard, and maybe plotting some crimes but not going to prison for them. Prison could be fun though it’d definitely freak my mother out. I want Histrionic Personality Disorder; the medical definition for one who is so extremely obsessed with attention they feel they can’t survive a second without it. I mean, that’s most definitely the truth for me, but the problem is, it takes forever to be diagnosed. Having that diagnosis would give me the exact attention I am ever so greatly craving. I’m in the process of speeding up this diagnosis for myself, but trust me, it’s not easy. That’s why I stopped talking to my brothers, and then today, I started talking to them again.

Giving a three-year, five-month, and nine-day silent treatment to your brothers definitely spices up family life and also takes a lot of endurance. The amount of times my mother sat me down screaming at me to just say the word “Hi” to my brothers is about equal to the amount of times my grandpa has asked what wefe is. A lot. There were points where I felt as if I couldn’t do it anymore. I’d wake up in the middle of the night craving to walk into my brothers room and tell them I just beat a world record or something. The idea of talking to my brothers became sort of a fantasy to me. I would spend hours in my room thinking up what the first thing I’d tell them would be when we talked again. Now that I have talked to them, though, I’m sort of glad I kept things simple by just telling them to have a nice day. SOMETIMES, keeping things simple creates even more mystery.

Anyway, as much as I fantasized and became depressed about not speaking with my brothers, I’m really glad I kept with it. The great silent treatment resulted in my mom becoming so concerned for my mental health — she has me in psychology appointments every day of the week. Could I ask for a better “punishment”? Ehh, I mean, staying in a mental institute for a few weeks sounds pretty exciting, but everyday psych appointments does the job pretty well. I was basically given the gift to talk about my crazy instances everyday for an hour, something I willingly and proudly enjoy to discuss, which makes me inspired to be even more psychotic! How great is that?!

I’m slightly concerned about telling my psychologist later today that I talked to my brothers. I’m afraid she may not interpret my insanity in the way in which I am in attempt to portray. She may think I am “emotionally healing” (note the sarcasm) when really, I talked to them because I knew the silent treatment gig was becoming old, and when things get old, it’s my job to make something new! Out of all the performances in which I have provoked, the silent treatment is without a doubt my favorite. It introduced me to the idea that this is just the beginning. Just four years ago I would have never imagined of doing that. I believe I am capable of anything, and my next trick will be even more daunting. For the next 3 years, 5 months, and 9 days, I will be proudly be the most glamourous face, on the side of your milk carton, you’ve ever seen. 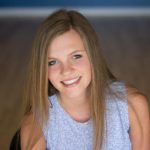 Hannah Horton is a 16-year-old short story/screenwriter and short filmmaker from Chicago, IL. Writing roughly one screenplay or several short stories per month, her works are near endless and full of dramatic, unusual plots and characters. Through living in several states, attending over nine schools, and growing up with parents in advertising, she has spent her life studying the obscurities and stories behind all types of people, therefore giving slight background to the peculiar characters in her works.