When I rolled out of bed late on the morning of Wednesday, March 23, my biggest concern was that I would be late for my AP Psych test — not my outfit for the day. Thus, I threw on Lululemon leggings and a Lululemon workout top, thinking the biggest problem of the day would be feeling more like a Tiger Mom than a high school student. I never imagined that the issue at hand would be being told I would not be CPR certified because my outfit was too “distracting.”

I know you’ve read about this before — about the angry “feminazis” who are pissed off that they’re told to change out of their yoga pants. But before you x out of this article, let me tell you that being told to “cover up” is actually one of the most degrading things to tell a person. I know it may not seem like a big deal, but when I was called out in a dirty, overheated high school weight room of probably around 40 kids for “having my boobs out,” never more have I wanted to crawl into a hole and never reemerge.

Let me explain. In my school we are told to change before gym class everyday. However, we are currently in our CPR unit, and since this activity is not exactly physically exerting, all of us have been told that changing before class is not necessary. So I walked into gym, holding my coffee, thinking that this day would go as boringly normal as usual.

Oh, how wrong I was. I hadn’t even taken my backpack off when my about 50-year-old female gym coach (we’ll call her the patriarch) told me I needed to “cover up.”

This was the shirt. 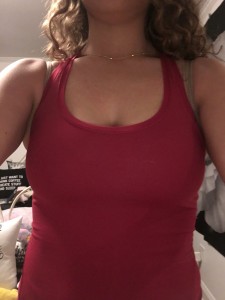 I was so taken aback that I didn’t even say anything at first. I kind of just stared at her like one would stare at a zebra, a zebra with 2 legs wearing a “Vote Trump” sign around its neck and carrying a piñata.

Picture the zebra with its beautiful piñata and rambunctious “Vote Trump” sign.

Yes, that face you just made, that was my face.

So, yes, I didn’t say anything at first, and I didn’t cover up either. She was not impressed. She stormed over to me and my friends as if we had just told her that we stole her car keys and assertively reminded me that she told me to cover up. My response was: “I know.” The instructor definitely did not like this, and she definitely did not like when I rolled my eyes at her either. In fact, she disliked this so much that she asked me to meet her in the hallway for a chat.

I obliged. After all, she is my teacher, and I respect authority — or at least, I respect morally-intact authority. So, I followed the instructor into the hallway, and she asked why I was giving her attitude.

In the most respectful and calm attitude I could maintain — given the circumstances and the feminist fire slowly burning in my soul — I responded that she was degrading and over-sexualizing the female gender.

She instantly went on some spiel about how she “warned us the first day of class” that there would be a strict dress code and that we could not dress inappropriately. While I do not remember hearing this warning, I was in no position to call her a liar — that would not have been cool of me. So instead, I decided to make my case on the fact that the issue was that we were definitely not seeing eye to eye on what “inappropriate clothing” was.

This was a shirt I had worn to school before. This was a shirt my mother had gotten me for Christmas. It was simply a Lululemon workout tank top — nothing more, nothing less. It was not cropped; there was no added padding. It was form-fitting as work out tank tops tend to be, but I didn’t think that was an issue as women everywhere wear form-fitting shirts all the time.

The patriarch went on to chide me on how my outfit was distracting, which is one of my favorite lines. No, really, it is. Because the line “your outfit is distracting” is just the epitome of one of the many things that is socially incorrect in our society today. Instead of teaching people self-control, we’ll teach others to cover up. Instead of teaching people to not stare and harass, we’ll confine girls everywhere to wool turtlenecks — because that’s what’s wrong with America.

When I told the instructor that I did not understand how my outfit was distracting, she decided to explain it to me with four simple words that I will cherish in my heart until I am old, in my wool turtleneck, watching my turtlenecked grandchildren frolic in the fields: “Your boobs are out.”

First of all, no. No, they are not. Is my shirt form-fitting? Yes. And do I, an almost 18-year-old young woman of the 21st century, have breasts on my chest area? Yes. But, I never thought this was shocking. I never thought that the fact that I had boobs was such a surprise. I thought it was normal, a good sign of healthy growth and development. Apparently, the instructor thought otherwise. I have F-cup boobs. What did the patriarch want me to do? Tape them down like Mulan did when she posed as her father’s son and went to fight the Huns? No thanks. I’m a confident little lady and will be proud of all my womanly aspects, but nice try, patriarchy.

The instructor proceeded to tell me that I didn’t have to be there if I didn’t want to be — which was funny because, no, I did have to be there. If I wanted to graduate, I had to attend gym class. And I also was there to learn a skill, not to be ridiculed in front of my peers. Where was that in the CPR class syllabus? I definitely hadn’t been briefed on that part.

In my attempt to defend myself by trying to politely correct the many things she was saying, the instructor finally got tired of my large vocabulary and persistence and instead resorted to the abuse of her authority by saying that she would not CPR certify me if I continued to wear “distracting” outfits or kept up the attitude.

While I’m pretty sure the instructor couldn’t actually refuse to CPR certify me because she didn’t like my fashion choices (as I’m almost positive the test is based on skill and not on your choice of dress), I realized that I was not going to let this morally-wrong woman prevent me from acquiring an important skill. So I told her “sure” when she asked if I was going to cut it out.

However, as I reentered the gym with a sweatshirt on, I couldn’t help but wonder what would happen if one day, after my certification, I saw a person passed out on the street while I happened to be wearing a tight outfit. Would I just have to call someone else? Am I not allowed to help them, or should I just leave them to gasp for dear life while I go around knocking on doors searching for an available wool turtleneck?

While my logical brain knows the answer is “no” and that I should obviously help the person, I would love to see what my CPR instructor would think.

‘Till next time, all my fellow empowered women. Keep rocking those #TightShirts, and stay fierce!