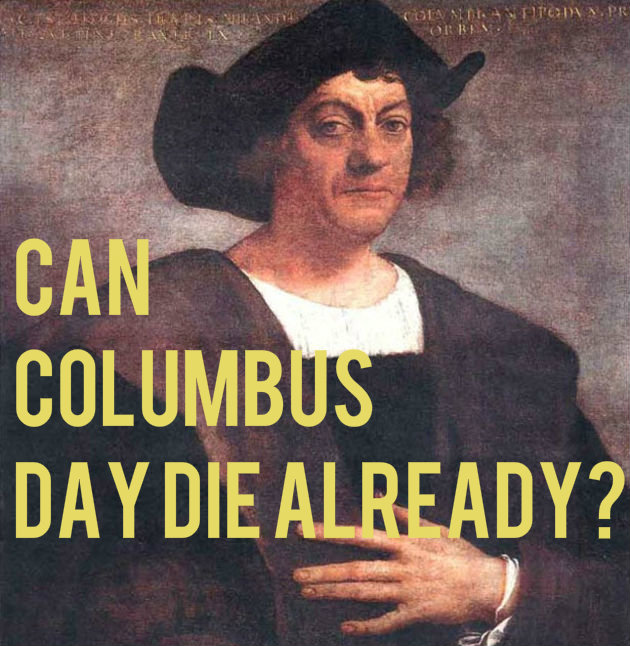 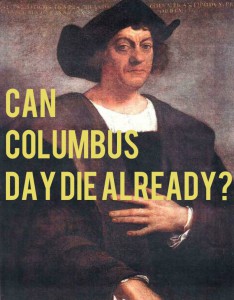 “In 1492, Columbus Sailed the Ocean Blue.” We all knew this, yes? We were taught it in elementary school. Christopher Columbus: the brave, intrepid explorer who, despite the world being flat, defied the odds and “discovered” America. And now, we have a national holiday to commemorate this incredible man’s journey. A day dedicated to a man who wouldn’t take no for an answer and because of whom we now have this great nation. A national hero.

Here’s a plot twist for you. Everything you just read is a lie.

Now, I know what you’re thinking. What could she possibly have against Christopher Columbus? He’s great! He found America! Without him, we wouldn’t have McDonalds!

I’m here today to tell you exactly what kind of a person Christopher Columbus really was: namely, a genocidal, pedophilic, racist, mass-murderer. I’m also here to pose the question as to how on earth we have a national holiday to commemorate someone who would be on trial for crimes against humanity if he lived today. And I’m not going to even get into the fact that you can’t “discover” a country already inhabited by millions of people or that you can’t “discover” the world was round when Egyptian, Greek, and Arab physicists already knew that 500 years prior.

The first problem with Christopher Columbus: He instigated mass genocide.

There are no two ways about it, folks. Most textbooks like to glide over this little fact, but information that Columbus himself wrote in private letters is enough to condemn him of systematically eradicating an entire people group — namely, the Tainos from the Island of Hispaniola.

Under Columbus’s leadership, the Spanish attacked the Taino, sparing neither men, women nor children. Warfare, forced labor, starvation and disease reduced Hispaniola’s Taino population (estimated at one million to two million in 1492) to extinction within 30 years.

In only 150 years, the multiple  indigenous populations that Columbus was in contact with went from 100 million to only 3 milllion. This doesn’t even begin to touch the atrocities he committed upon the Arawak Indians, the first people group he came into contact with. Which brings me to…

The second problem with Christopher Columbus: He is responsible for starting the Transatlantic Slave Trade

You know that massive blight in the Western World’s history wherein millions of people were abducted from their homes and sold across the sea? Yeah. We’ve got Columbus to thank for that.

When he first hit the shores of the Americas, he decided that he had quite literally hit a gold mine. Above all else, he wanted treasure and riches and didn’t care an iota about who he had to step on to get it. On Columbus’ first return trip from the Americas to Spain, he kidnapped over 500 Arawak Indians and took them back to Spain to parade them in the streets and to beg Queen Isabella for more funding. Only 300 survived the journey. Queen Isabella, evidently impressed by this disgusting display, granted him his desperately longed after funding, and most of it was used to purchase military grade weapons to further subdue and enslave the native population.

The third problem with Christopher Columbus: He committed crimes against humanity.

Crime(s). As in multiple crimes. As in I literally do not have enough room in this article to explain to you the extent to which this man’s atrocities extend. I can sure try, however!

This next one is so bad, it deserves its own category:

These are words he actually wrote in his actual journal:

A hundred castellanoes are as easily obtained for a woman as for a farm, and it is very general and there are plenty of dealers who go about looking for girls; those from nine to ten are now in demand.

But, by all means, let’s force children to memorize that Columbus was a brave Catholic sailor who wanted to spread religion to the world and pick up a couple of spices along the way.

He was so horrible that one of the men who came to Spain with Columbus ended up becoming one of the most vocal voices of dissent. This man, Bartolome de las Casas, became a Dominican friar after witnessing the horrors that Columbus was committing and allowing to be committed against the native population. He worked tirelessly to expose the doings of Columbus, traveling back and forth across the Atlantic Ocean to advocate on behalf of the indigenous Americans. He’s  one of the reasons we have such descriptive, eye-witness accounts of Columbus’ true nature and legacy.

Honestly, if we have to celebrate a 15th century Spanish conquistador, can it at least be this guy?

My (pen)ultimate point with all of this is that if someone tried to institute “Adolf Hitler Day,” there would be a hue and cry. Why? Because he was a racist, megalomaniacal, mass-murderer, of course! So, why in God’s name are we actively celebrating a day dedicated to a man who fits that description exactly?  How can we as a nation claim to repent from our legacy of slavery and brutish cruelty and continue to honor this man?

What it really comes down to is this: There are only two men that have national holidays in America named after them.

One is Martin Luther King Jr.,  the beloved Civil Rights leader who preached non-violence and revolutionized racial equality, radically improving the lives of millions of people and future generations of African-Americans.

The other is Christopher Columbus.