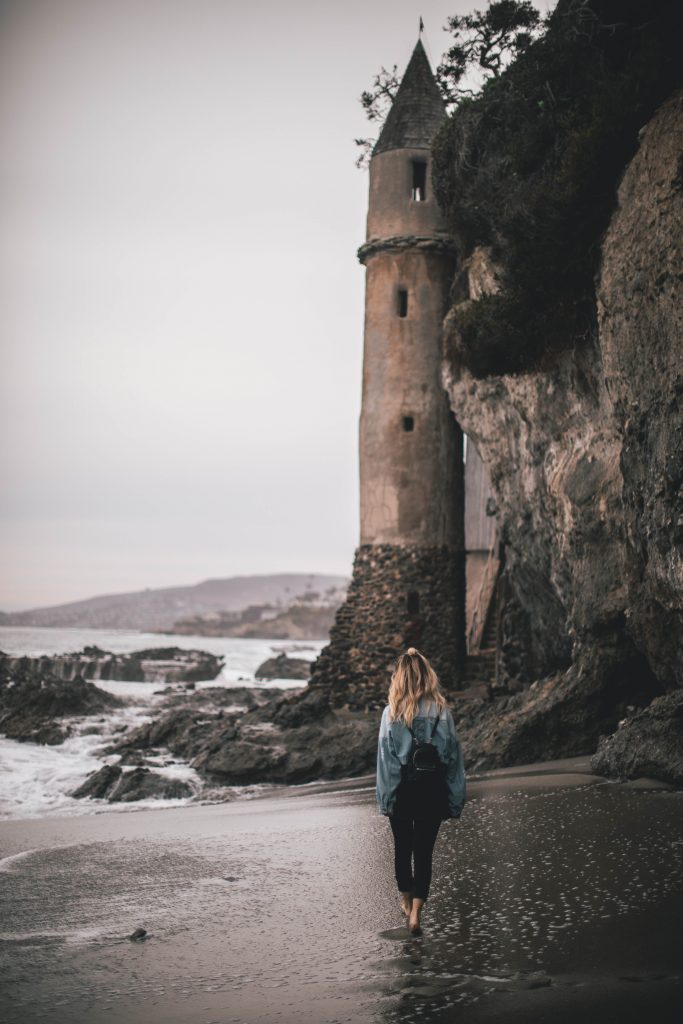 Is there really such a thing as going too far to find inspiration?

Now is probably the wrong time to be asking myself this question as I clumsily yank off my shoes in the middle of a rain-soaked beach a hundred miles away from home. The thought hadn’t really occurred to me, though, when I was frantically booking the B&B and train tickets, so I guess I just have to accept my hasty decision and make the best of it.

To be fair, escaping to the sea seemed like such a good idea at the time. After all, what better way for an uninspired writer to find new ideas for her novel than with an impulsive adventure?

…Except that, from what I’ve read, this usually involves a few months stay in a bustling city like Paris or Prague. Not a weekend break by a sleepy coastline at the edge of nowhere.

Oh, well. I’m here now. On this beach. In search of inspiration.

And my feet are absolutely freezing.

I could just blame the nice young waiter in the café, I think with a sigh as I trudge through ocean puddles towards the cliffs up ahead. He was the one who’d suggested the beach, after all.

“If you’re looking for book ideas, that’s definitely the place to go,” he’d babbled excitedly as he handed me my coffee bill. “I won’t tell you why, though – better for you not to have any preconceptions, right?”

And so, fuelled on renewed enthusiasm (and maybe a few too many cappuccinos), I’d set off, following the waiter’s directions to the nature reserve at the edge of the village and along the winding woodland path that led to the seafront.

The walk itself was pretty inspiring, actually. The trees in the reserve were that mind-bending kind of tall that makes you dizzy if you dare to search for their tops, while down on the ground their twisted trunks create giant fairy rings around the craziest coloured wildflowers.

In fact, I’m just starting to wonder if I should leave the beach and head back there now when it hits me:

Something’s not quite right about the cliff face in the distance.

I blink hard a few times just in case my contact lenses have slipped, but no, there’s definitely something not very cliff-like going on over there.

My frozen feet are instantly forgotten as the warmth of curiosity takes over. I stuff my sodden shoes into my bag, wrap my jacket around me tightly against the sea breeze, and pick up my pace, willing the shapes in the cliff to sharpen into focus.

After a minute or so of walking and a little more squinting, I finally realise what I’m looking at.

Propped up against the cliff face, as though someone left it behind by accident, is a tall stone tower.

As soon as I’m near enough, my eyes begin to eagerly trace their way around the tower’s ocean-worn torso and all the way up to its swirling, slate-grey spire. Like the trees back in the woodland, it reaches an almost staggering height, so I let my vision fall back past the scattering of wind-whistling windows across its torso and down to its pebbly, rock-rooted base.

I shake my head, completely perplexed. I mean, it’s so random, this tower being here! And yet…

And yet, there’s something so purposeful about it at the same time.

It’s so faded and old, yet so strong.

So plain, yet so… mysterious.

And just like that, without even an inkling of warning, my imagination starts conjuring up bizarre and beautiful stories of what could be happening inside it.

Imprisoned princesses, jaded ghosts, water witches and all other manner of eccentric, magical and melancholy things rush through my mind at a hundred miles an hour, replacing the eerie quiet of the seafront with an unrelenting buzz of fantasy.

Before my thoughts can run too far ahead of me, I whip out my travel notebook and trap them between ink and paper, scribbling away in such a frenzy it’s a miracle that the pages don’t catch fire.

I laugh in spite of myself.

How can it be that this simple old tower has opened my mind to such a realm of possibilities?

It’s only when I’m back in my B&B room one daydreamy hour later, typing away on my laptop and drying my poor feet in the folds of a warm towel, that I realise:

There is such a thing as going too far to find inspiration.

Because, for all you know, it could  be just around the corner.