Interview with Ruth Ware, Author of The Woman in Cabin 10 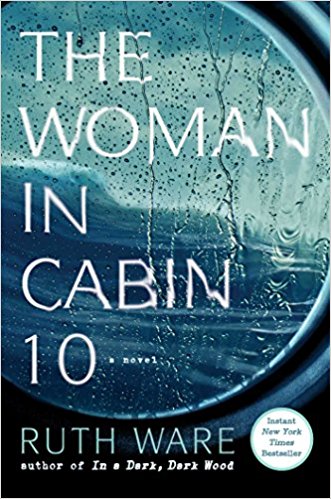 Ruth Ware is the author behind the bestselling thrillers In a Dark, Dark Wood and The Woman in Cabin 10. These adult novels will leave readers both horrified and intrigued. With the ability to tell bloody, murderous, and mysterious stories about the darkness of human nature, Ruth Ware provides readers with books that are captivating and completely addicting. Her latest release, The Woman in Cabin 10, came out in paperback on April 11. Below, Ware describes her writing style, the eerie thrillers she writes, and what fans can expect from her next novel.

1. What first inspired you to write mysteries/thrillers for adult audiences?

Well, originally, it was a conversation with a friend — where she said she’d never read a psychological thriller set on a hen night. And immediately I knew that this was a story I wanted — needed! — to write. I didn’t sit down and decide to tackle mysteries as a genre — in that sense, the genre found me rather than the other way around.
.

2. While writing both In a Dark, Dark Wood and The Woman in Cabin 10, what/who were your biggest influences?

Oh, a whole host of influences. Horror movies were a big one for In a Dark, Dark Wood, all those scenes where the main character runs around shutting drapes and locking doors. In terms of writers, though, I was a big classic crime geek as a teenager, and there is definitely a lot of Christie in there, in terms of the locked room setting and the sense of stifled luxury in The Woman in Cabin 10. The setting is pretty much a straight homage to Christie books, like Murder on the Orient Express or Death on the Nile.
.

3. When writing your stories, what steps did you take in order to keep the reader guessing throughout the entire story?

I’m really not sure — I don’t think about it as clearly as that. I guess I just have an idea of what the solution is in the back of my head, and I go through dropping in bits of information and red herrings just as and when they occur to me. Then when my editors read it, they’ll occasionally say where I’ve made something too obvious or where someone needs a stronger motive to be a convincing false lead. I think it’s important to play fair — the ideal is when the solution feels like you should have spotted it all along, but you didn’t. But crime readers tend to be extremely well read in the genre, so it’s hard to pull the wool over their eyes!
.

4. If given the chance to live in any book for a day, which would you choose, and why?

Ooh… great question! Do you know, I have never been asked this before. Definitely not a crime novel; I am far too wimpy. Maybe Anne of Green Gables? I have never visited Prince Edwards Island, and L. M. Montgomery paints such a magical portrait. Sorry, I realise that’s not a very thrillery answer…
.

5. In a Dark, Dark Wood is soon to be a motion picture. What details (if any) can you share with readers about the film adaptation?

Other than what’s been announced, not a lot! I know nothing about the film business, so occasionally I get baffling updates about script treatments and so on, but I am quite content to sit back and let the experts deal with that side of things.
.

6. Are you a plotter or a pantser?

Bit of both. I think with crime especially, it’s important to have a solution in mind and the bones of the plot in place; otherwise, it’s really hard to give the reader a chance to guess the ending. You can’t seed through clues if you don’t know what the clues are supposed to be pointing to. But it’s also important to leave enough room for the characters to surprise you. Ultimately my books are psychological thrillers, I suppose, and the “psychology” part has to come firmly from the characters themselves. I can’t push them through the motions of what I want to happen; I have to be led by what’s convincing for them as characters, and I don’t always know that until it comes to the crunch.
.

7. When developing characters, what steps do you take to make the character feel more realistic and emotional to the reader?

Yikes, these questions are making me feel very disorganized! I’m not sure I think about it in such organized terms. I suppose the main thing for me is listening to the characters. I tend to start thinking about a book a long time before I write it; usually from about the halfway point of whatever I’m currently working on, I will start to think about the book I’ll write next, and think about the characters involved. So I spend quite a lot of time with them, trying to understand them as people, before I ever start writing about them. But then, once I’ve started writing, it becomes about listening to who they are as people and trusting them if what they want to do conflicts with my preconceived plot ideas. Which basically comes back to my answer to question 6.
.

8. Do you ever see yourself writing a different type of novel, possibly for young adults or in a different genre?

I wrote dozens of books before I wrote In a Dark, Dark Wood, most of which are languishing under my bed with no plans to come out! They covered a huge range of genres, from horror and fantasy through to straight fiction, as well as several YA books. Some of them were written when I was very young and were part of the process of finding my own style, but I could definitely imagine revisiting some of the themes one day. Not in the near future, though. I have a few more crime thrillers I want to write first!
.

9. Are you currently working on another novel? If so, what details (if any) can you share with readers?

I’ve literally JUST finished editing my third crime book, which is going to be called The Lying Game. It’s about four women who were at boarding school together and come back together in their thirties, now professionals and parents, to face up to something they did all those years ago…
.

10. In conclusion, what advice do you have for aspiring writers, specifically those who hope to write thrillers or mysteries?

Well, as you may have guessed from my answers above, I am not really sure how my own writing process works, and most of the writing “rules” I read on the Internet, I find myself disagreeing with, so I’d always hesitate to prescribe to others. But I think you can do a lot worse than simply trying to write the book you yourself would want to read. You just have to hope other people agree with you.