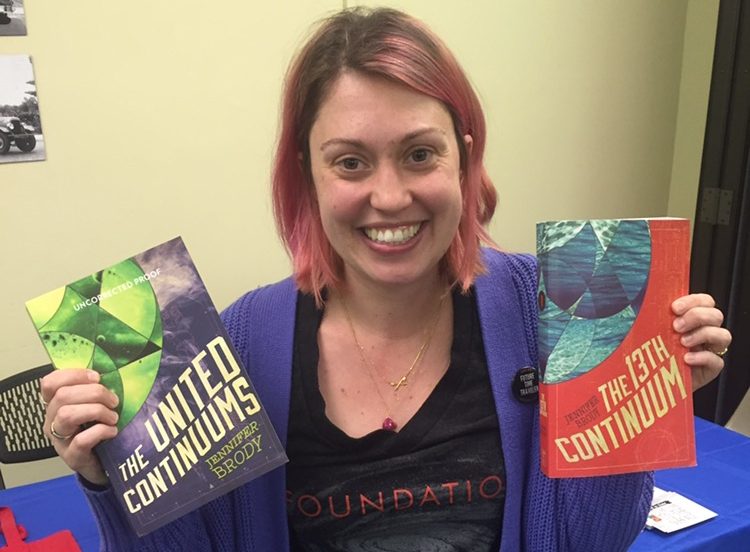 Jennifer Brody, author of The Continuum Trilogy, was kind enough to meet me for an interview about her current young adult sci-fi series while also providing insight into her time in the film industry and her view on the writing world. Brody is sure to intrigue readers with her fast-paced novels and her true love for her readers. Below are the highlights from our conversation and a few sneak previews as to what her trilogy’s final book, The United Continuums, has in store for fans of the series.

For starters, what first inspired you to write the world of The 13th Continuum, such as characters, the dystopian setting, etc.?

The first inspiration for the book came during the BP oil spill in the Gulf of Mexico. So, like a lot of people, I was somewhat horrified by watching the oil spread over the ocean, and a lot of sea life was dying, and I started to think about what would happen if we couldn’t live on the surface anymore and what if we had to go really deep in order to survive.
.

If you could choose to live in space like Aero or live under the ocean like Myra, which would you choose?

I am 100% going to the 2nd continuum, mostly because I am a big nerd and I am obsessed with Star Trek and have always wanted to live on the Enterprise. That’s probably where I would live. I’ve always been interested in the deep ocean, but that world to me feels claustrophobic and oppressed, so I think I would go to space.
.

Why did you choose to write Sci-fi for YA? Do you ever see yourself writing in a different genre or for adults?

Yes, I do. Actually the first book I ever wrote, which did not sell, was an adult contemporary novel, so it was pretty different from [The 13th Continuum]. It’s one of those things from when I first started writing; I wasn’t sure what I should be writing exactly, but my interest usually ran to things that were either adult contemporary or to genre. And when I first started writing [The 13th Continuum], I was like, “Why didn’t I start writing this from the beginning?” I should have known since my favorite movies were Star Wars, and I worked on Lord of the Rings, and I worked on Golden Compass. It just like clicked when I started writing [the series].
.

Of your three books in The Continuum series, which was the most difficult to write?

The third one [was the hardest], but they are all hard for different reasons. The first one’s hard because it’s the first one, and as a debut author, you don’t know if it will get published, you don’t know if you can even sell it, but there’s a freedom to that too because you’re writing it for yourself.

As an author, what has been your funniest or most memorable moment?

I love talking to kids, especially my tween fans because they are so passionate and when they love something, they are so into it.

The funniest thing recently is a script that there is an actor that wants to direct it, and he’s kind of a name, and I think it’s really funny that he wants to direct the script. I might have a meeting with him, and that could be interesting.
.

If you could share one weird or interesting fact about yourself with readers, what would you choose?

I was born in the Virgin Islands, and that’s kind of random. I have a one-eyed golden doodle named Commander Riker; I’m kind of a big Trek nerd. I worked on Lord of the Rings.
.

The final book in your ongoing series comes out this summer. What can you share with readers, and what can they expect from the trilogy’s final installment?

I can share that I think it is the best of the series; I love it. [There] are more points of view, and the book expand[s]. It is a fairly satisfying conclusion, and we do definitely resolve the love stories. I’m not going to say what we do to resolve them, but people ask me that a lot. We do lose characters, so be prepared.
. 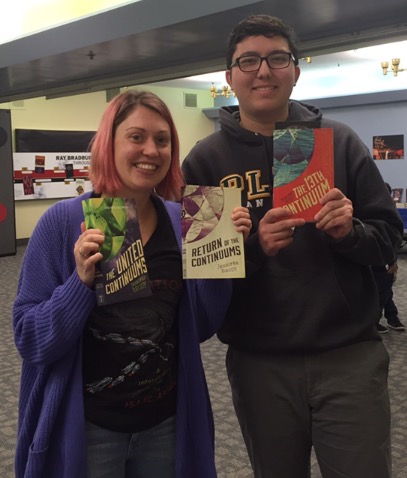 Are you currently working on another novel? If so, what details (if any) can you share with readers?

I am working on what’s going to be a new book that will also be YA science fiction. It’s going to have more of a romance in the center of it and a lot more space opera kind of stuff. And I like writing military space stuff, so it will have some of that.
.

Finally, what advice do you have for aspiring teen writers?

My advice for teen writers is to read a ton and read as much as you can. And with writing, focus on your own individual voice and what you have to say that’s different. The other thing is to really go where your heart is. If you love science fiction and that’s all you want to write, then that’s probably what you should be writing. But if you hate science fiction and you only read contemporary, then don’t try to write something you don’t love.