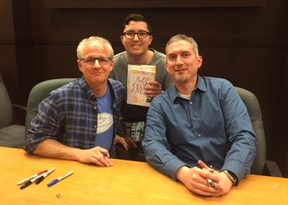 In January of this year, I had the honor of attending Jeff Giles’s L.A. launch for his debut novel, The Edge of Everything. At the event, I was able to not only meet Jeff, but I also got to interview best-selling author James Dashner. It was so much fun to get to sit down with James, one of my favorite YA authors, and ask him a few questions regarding his work and what he has planned for the future. He was one of the nicest authors I have had the pleasure of meeting, and it was incredible to get the chance to speak with such a beloved and famous writer — an experience that remains as one of my favorites. As an added perk, I also got to chat with Germ Magazine’s founder, Jennifer Niven. (We may or may not have geeked out over our love for James Dashner and his amazing work.) Read below to see my interview with James Dashner, discussing his Maze Runner series, his best moments as an author, and what fans can expect from him next.

What has had the greatest influence on your writing, specifically for the Maze Runner series? 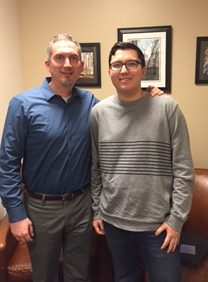 I have a lot of influences, but I think that Stephen King is number one; he’s been my favorite since way too young to read his books. The Maze Runner specifically was really influenced by the T.V. show Lost. I was watching [the show] when I started writing [the series], and when you look at both, you can see the influence.

If you could choose one character to be in any one of your books, which would you choose and why?

I really love Chuck. He’s really special to me, and that was why it was really fun for me to write The Fever Code because I could bring Chuck back; he provides comic relief, and [the book] really shows why he’s important to Thomas. It would be cool if I could somehow wedge him into all of my books.

The Maze Runner world and the glade are very complex with lots of intricacy. How did you first create the world?

One night I was going to bed and trying to think of some new story to write about; and, I don’t know why, but I thought of this giant maze, and I could see it with the stone walls and the ivy and the archaic look to everything. It really developed in my head; it was like the first character, and I built the world around it.

What has been your most memorable/funniest moment as an author?

[My most] memorable [moment] was when I got to meet Stephen King. I was able to spend the afternoon with him, and his first words to me were: “I am your biggest fan.” I know he’s just being nice, but how surreal is that that your favorite author would say something like that? He’s just this hilarious, down-to-earth guy. That is definitely the highlight of my career.

What does a typical day in the life of James Dashner look like?

On a typical day, I wake up, exercise. I try to do a writing or editing session – one in the morning and one in the afternoon. That can last about an hour or two; I usually can’t go much longer than that at one time. But I also do a lot of consumption of pop culture. I usually watch a movie or a couple of T.V. episodes every day to keep my creative juices flowing. Of course I read a lot [and I also] like to go out to a nice lunch. It’s a pretty fun job, and I travel a lot. [When] traveling, you never know what’s going on.

What is the most recent book that you have read and loved?

In December, on this whim, I decided to read David Copperfield by Charles Dickens. I’ve always wanted to read that, but it seemed way too intimidating. But I genuinely loved it. The clever writing, the humor, and the emotion just blew me away. I just think it will be my favorite book for a long time.

Speaking of T.V. shows, are there any shows you are binge watching right now?

This is really weird, but I decided to watch Twin Peaks from way back in the early nineties because Showtime is bringing it back with all of the original cast. So I’m watching that right now, and it’s so weird. But I do like it; it’s fascinating.

If you could share a single odd, weird, interesting, or funny fact about yourself with readers, what would that be?

I used to be an accountant, which could not be any different from what I do. It was my backup plan, and I studied it in college and worked in that field for a few years, and it was horrible and I hated it. The sitting down and crunching numbers was awful. If anything, it motivated me more to become successful at writing.

Are you currently working on another novel? If so, what details, if any, can you share with readers?

I am really determined to write a couple of stand-alone novels. I’m actually working on two at once. They are both horror novels, so I feel really good about both of them. There will probably be news about that coming relatively soon. One of them is young adult and one of them is [for] adults, although they aren’t that much different from each other. One just has an older voice; a man is reminiscing this scary story from his childhood.

In conclusion, what advice do you have for aspiring teen writers?

First of all, practice. It’s obvious, but it’s the most important one. Try to write everyday. [Also], study your craft and figure out a way to have patience. I got rejected many times and had some books that weren’t that successful. I really had to work hard, but it’s all paid off. Have patience; it will help you.