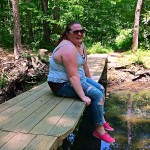 Rachel Waring is a sophomore at Christopher Newport University. She is studying for her Bachelor’s Degree in Communication Studies and a minor in Philosophy and Religious Studies.

One thought on “Just Words by Rachel Waring”