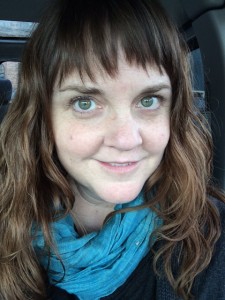 You and Me and Him is a touching story full of friendship, music, and wit, and tomorrow, July 7th, marks the day that this remarkable YA novel by Kris Dinnison will officially be released!

Author Kris Dinnison recently shared an essay with Germ called “Soundtrack for Saying Goodbye,” which shows her passion for music and allows the reader to see a glimpse of her lovely personality. Music is very important to Dinnison — as evidenced by her essay and the many musical references in You and Me and Him — and if you’re a lover of music as well, then you should check out the music playlist available on her website that she made to accompany the book.

I was very excited to have the chance to ask Kris Dinnison a little bit about herself and her intriguing debut novel. 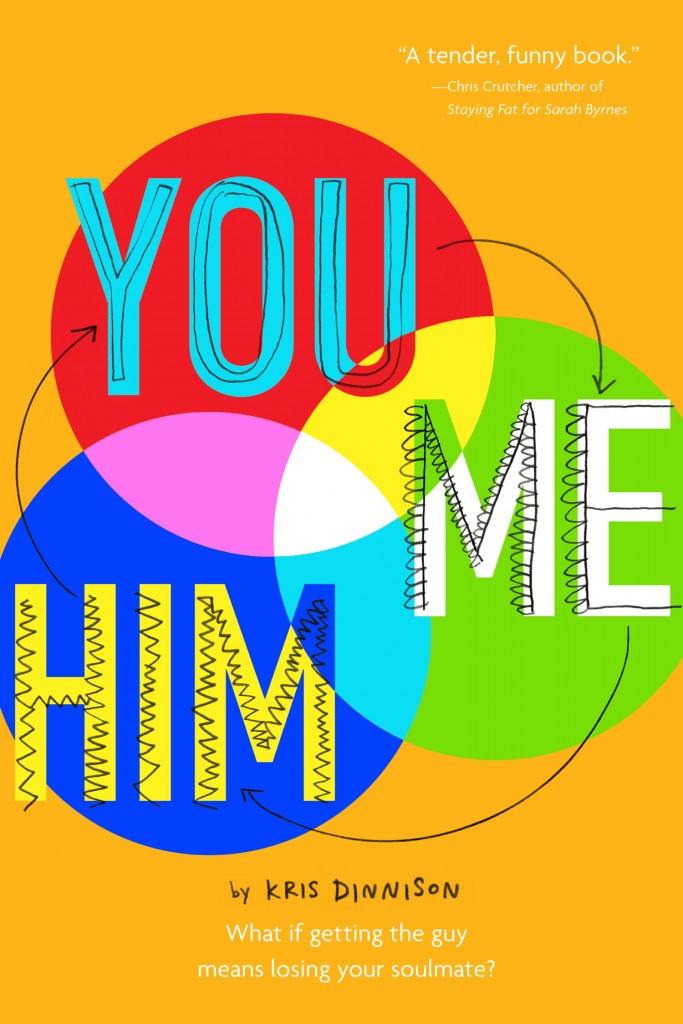 Here’s a synopsis of You and Me and Him from Kris Dinnison’s website:

“Between the two of us, Nash and I have had more unreciprocated crushes than Cedar Ridge has stoplights.”

Maggie and Nash are outsiders: She’s overweight. He’s out of the closet. They’re best friends, and they’ve helped each other survive their small-minded small town. But when Tom moves to Cedar Ridge at the start of the school year, they have something unexpected in common—feelings for the same guy. As emotions take hold, Maggie and Nash’s friendship is put to the ultimate test . . . Up until now they have always chosen each other, but what if winning someone’s heart means losing your soul mate?

From what I’ve read about You and Me and Him, it sounds like a wonderful story, and I can’t wait for it to come out July 7th! What made you want to write this witty story about misfits and the ultimate love triangle?

I had a note in my writing notebook that just said “girl who works in a record store.” And then I was thinking about stories that seem familiar and how I could turn them sideways a little. Naturally the love triangle is one of those, and the two friends who fall for the same person is also one of those. I sort of mashed them up, twisted them, and made one of my characters the girl in the record store and started writing. I don’t mean for that to sound like it was easy to write. Maggie, the main character, was talking to me from the beginning, but those first few drafts were not pretty, I’ll admit. But I was really drawn to this story of these two friends.

Would you say that You and Me and Him is more about crushes or more about friendship?

In my mind it’s more about the friendship. There are these times in our lives where we think we want what we don’t have. A lot of times that thing we think we want is a relationship, and in high school a lot of people are experiencing crushes and romantic love for the first time. But I’m always struck by the relationships people neglect or leave behind when then have that emotional surge of the crush and new relationship. The friendships that get damaged or even crushed under the weight of that longing for romance are sometimes way more valuable than the relationship they get crushed by. I was interested in writing about two friends who made mistakes and did some damage to each other and whether or not they could fix that.

Are any of the characters or their experiences based off of real life? I’ve heard that the narrator and protagonist, Maggie, is especially realistic and relatable. Do you see any of yourself in her?

Maggie is definitely a character I relate to. A lot of her experiences and concerns are ones I have had in my life: body image, unrequited love, damaged friendships, feeling misunderstood. But Maggie is maybe the person I wish I’d been in high school. She figures out stuff I’m still working on. So I think Maggie is the closest to me, but she’s also a more idealized version of me. She’s still flawed, but she owns those flaws in a way I didn’t when I was 17. All of the characters have experiences that I have had, and all of them are me at least a little bit. Even the mean PE teacher contains part of both my experiences and my personality, although I hope I don’t unleash that part of me on the world very often.

Can you tell us a little bit about yourself? When did you first become interested in writing?

I loved reading from the time I was little, so I thought being a writer would be the best job ever. I was always a good student and a competent writer. But I didn’t think of myself as creative. I didn’t think I had a lot of good ideas for stories and fiction, so I stuck to writing for school and doing a little freelance writing to scratch that itch. I was a teacher, so I was teaching writing, but I wasn’t doing much of it myself. It wasn’t until just a few years ago that I started trying to write fiction. I wrote a lot of bad, half-finished stories before You and Me and Him. But I learn more from the bad writing I do as from the good writing, so that’s okay.

How often do you write? Do you have a set schedule for when you write, or is it pretty spontaneous?

My husband and I own two retail businesses and a café, so I work a lot. I try to arrange my schedule to make time to write regularly, but a lot of times it gets pushed to the back burner. I recently changed some things at work so that I’m not actually scheduled for shifts very often. That’s been amazing because it means I can write in the mornings almost every morning and then go to work when I’m finished and do the things that need doing. So right now I’m able to write 4-5 days a week on a good week. That doesn’t always work out, but I’m getting a lot more writing in than I did a few months ago.

Do you ever encounter writer’s block? If so, how do you push through it?

I kind of feel like I have writer’s block every day before I actually start writing. I can go through a whole litany of reasons why I can’t write on a given day. Once I sit down I’m usually able to write quite a bit, but my perfectionist mind tries to talk me out of trying every day. Then I give myself permission to write badly and fix it later, and that usually helps me bypass that little perfectionist critic that lives in my brain and tells me I’m not good enough and I should stop wasting time.

Do you have a favorite quote about writing?

“Whatever it takes to finish things, finish. You will learn more from a glorious failure than you ever will from something you never finished.”  –Neil Gaiman

This quote is magical for me because of that whole perfectionist mind that tries to take over. I know I have to plow through and finish even if it’s not great. It’s easier to revise bad writing than writing that doesn’t exist at all.

Do you have any advice for young writers hoping to make a career out of it?

It’s the same advice that you hear all the time: Read a lot and write a lot. Repeat. That is the best training for a writer. And learn to value (not just endure, value!) feedback and rejection because if you’re going to be a published writer, you will have a lot of both to process.

There’s this great poet I know named Lauren Gilmore who just published her first book of poetry (Outdancing the Universe from University of Hell Press). She’s been writing and performing her poetry nonstop for about four or five years. She graduated from high school the same week her book came out. She reads and writes all the time, and because she’s a performance and slam poet, she’s constantly putting her work out there in front of other people, letting other people evaluate and see what she’s doing. It requires courage, but that’s what it takes to be a published writer.