“Okay…” Harper Little released a flap on the last cardboard box and watched it settle into place. Looking up, she grinned at her mother.

“What?” Vivian Little rolled a felt-tip pen between her thumb and forefinger. Her blue manicure gleamed against pale skin.

Vivian laughed and dashed her pen over the pad of paper she was holding. “You forgot your riveting eyes.”

“Right.” Harper let out a huff and smoothed the frizz down both sides of her part. “I’m a ten, I think.”

“And so humble.” Her mother laid the completed checklist down and stood up, reeled Harper in with a palm around her wrist, kissed her cheek. A mauve pair of lips were imprinted.

“Mom.” She pivoted into her private bathroom, a perk she was going to miss in about three hours. With dampened toiled paper, she rolled over the mark. The tissue broke off in white freckles, and she blinked at herself. Vivian was right about one thing — her eyes were exceptional. Beaming blue and effervescent, they had been drawing attention since Harper was a toddler. Waitresses said she should be a diaper model; teachers gave her extra pats on her shoulders as they filed out for recess; girls either fawned over or hated her, and the boys shied away.

Vivian leaned into the doorway, and Harper offered a wan smile in the glass. Her mother had given her everything else, it seemed — a knobby-kneed frame, milk-white skin, thin lips — but not those eyes. They were from her father, a man she’d never seen or met or even talked about, really. It was just understood that Harper’s eyes weren’t Vivian’s flat brown and that it was perhaps the only perk to come from him at all.

Harper thought about asking his name, as she had several times over the years. Now that she was moving out and into the world, her mother might feel nostalgic enough to offer the syllables. Were they two, or three, or four? Did he and Harper share letters? Was it a kind name, or a cold one — something like Richard or Gregory?

She didn’t even care to know his last. It wasn’t like after eighteen years of no connection whatsoever that Harper wanted to strike up a relationship. Vivian — she was enough. And Harper’s stepfather, and her stepsister. It was all good, their family. Harper just wanted to put a name to the eyes.

Vivian’s head was tilted to the side as she watched her daughter, and there was a warmth coiled in her features. Harper couldn’t stomach the threat of draining it away. She lifted the corners of her lips further so that they were at their thinnest, and Vivian echoed. Then she picked up her toothbrush and squeezed a peppermint line across the bristles. She could wait another eighteen years.

In the car, they played The Cure while Vivian reminisced about her days at the college. Harper had somehow ended up at the same prestigious university, a stone’s-throw of forty-five minutes away. She was glad she’d be close to her family; she wasn’t one of those souls who strove to make every change as drastic as possible. Anyway, Harper had grown up hearing tales of this school, of its beautiful quad and the historic buildings and the lake it bordered. Vivian had swam there with her gaggle of girlfriends and tanned on the lawn, and now Harper would, too. First she’d have to find some girlfriends, but that shouldn’t be a problem.

She propped her head up against the glass and thought about her mother’s euphoria in the days that they’d filled out the application and scoured over Harper’s essay. She was sure she wasn’t going to get in, not with her grades and scant extracurriculars — choir, yearbook — but then the letter had come. Admitted with a full scholarship. Both Harper and Vivian had cried.

It was a dream come true for Harper and a dusty one for Vivian, as she’d dropped out after getting pregnant with Harper her sophomore year. Her mother never spoke about it much, but Harper knew it had to be difficult as all communication with her college friends dwindled, and then the people themselves trickled away as they jetted off to new worlds and lives. Vivian stayed behind and raised Harper, remarried, moved to a cute three-bedroom on a corner lot. She went back to school online and finished her business degree, then got a job at an accounting office.

It was a boring life. Harper sometimes blamed herself for that, so it only felt right that when application time rolled around, this university was at the top of the list. She had to try, for her mother. And she’d been able to give that to her. It was the greatest moment of Harper’s existence.

“Momma—” Harper still called her that sometimes, when she was feeling fuzzy.

“Sorry, I—” Harper shook her head. “I guess I just wanted to say thanks.”

“Oh.” Vivian turned down the volume. I don’t care if Monday’s blue… “For what?”

“My life…” Her laugh was sandpaper. “You sacrificed so much—”

“Harper…no.” A glance revealed Vivian’s eyes had taken on a sheen. “I never gave up anything. You’re the best…” She cleared her throat. “Don’t ever think you’re anything but the best thing that ever happened to me. That I ever did. The best. I think about my life before you and it was—” She sniffed as the tears spilled over, taking one hand off the wheel to dab at them. “Gray, Harper, it was gray.”

Harper’s own face glistened. “I’m going to work really hard, Momma. I’m going to graduate with honors, and I’ll tell everyone it’s because of you.”

“Oh, honey.” Vivian moved her hand from her eyes to Harper’s knee. “I just want you to be happy. That’s all. And not flunk out—preferably.”

They both laughed, weak sounds, but better than tears. “Okay,” Harper said. “I will. Not. I mean, I will not.”

“Good. That’s all you need to promise.”

They were silent for a moment. The Cure wafted back through the speakers. Tuesday’s gray and Wednesday too…

“You know,” Harper offered after a moment, pulling her legs against her chest, “there’s just one thing I want you to answer.”

“Did you love my dad? Ever?” Thursday I don’t care about you…

Vivian’s forehead wrinkled. “Why does it matter?”

“I don’t know.” And Harper didn’t. She just wanted to hear Vivian’s answer. Maybe love made it better somehow. Maybe it made her right. “Could you please just answer? This one thing? And then I won’t ask about him again.”

“That’s…fine. You can ask me anything.” Harper knew this wasn’t true. But she appreciated her mother’s efforts. It was unspoken that they didn’t speak of the man who’d impregnated Vivian, who’d continued his college career while she left and started over, while visions of the future detached like dandelion puff and floated away in clouds.

“So,” Harper ventured, her voice a hovering thing. “Did you?”

Their exit came up, along with a sign that advertised the college. Harper studied the name and its letters. Hers overlapped with three. Maybe that was as much of him as she was ever going to get.

The dorm was a little cold. Harper tried to adjust the thermostat, but it didn’t seem to work, so she texted ‘space heater’ to her mother and put on a sweatshirt. A beat later her phone dinged with a cheerful reply: ‘On it,’ punctuated with a smiley face.

She flopped onto her petite twin bed and imagined Vivian’s arms around her like in their parting hug two hours after arriving. She was mostly unpacked, the room being so small that she couldn’t bring much. She had her books and her music, though, so that was fine. She sat up and put on The Cure.

Later was an orientation dinner after an address from the dean. Harper was dreading that, having to go out and socialize when she felt so down. She’d promised Vivian she’d make friends, and an almost-obligatory function seemed a good place to start. So she ran some mascara over her eyes and then wiped it off. She didn’t want to draw attention to them tonight. She just wanted to…be.

For a moment Harper wished that Vivian had given her everything, that she didn’t gloat any visible parts of that terrible man — because every time Harper met her reflection, she was meeting him. And maybe her eyes were the worst part about her.

Harper found the cafeteria abuzz with the chatter of five hundred excited freshmen. Harper joined the meal line and accepted various bland foods with a mousy thank you. She plopped down in an empty seat at an empty half of a long table and forked bites into her mouth.

After a few minutes, a girl took the chair opposite hers. She offered Harper a smile, which shifted to a grin.

Harper shook her head. “No…”

“Wow. Your eyes are gorgeous.”

“Cute name. I go by my last. Technically my name’s Sharon, but I hate it. So Jones.”

“Yeah…my last name is Little. So that wouldn’t work.”

Jones laughed. It was a trilling, happy sound. One that Harper could get used to. “That’s also cute, though. Harper Little. Your whole name is adorable.”

They talked a little more after that, exchanging hometowns and favorite movies and family details. Harper was just about to answer a favorite band inquiry when the room suddenly resounded with microphone feedback. She straightened and turned her stare to a stage, where a grey-haired man was mounting the steps. He was hard to see from here, the lights glinting off his glasses, but he had a friendly smile.

“Good evening, class of twenty-twenty. And welcome to the best four years of your life!”

Students around the room set down their utensils to clap politely. He raised his own hands and joined them. When all was silent, he relaxed back on his leg. “My name is Charlie Hamm. I’ve been fortunate to have thirty years here as dean, so I’m sad to share that this will be my last.”

Boos went up around the room. He grinned.

“I know. I know. But I’m excited to meet you all. I’ll be coming around the tables here in a minute. But until then, I’d like to say a few things—”

Harper half-listened through the rest of his speech, which concluded to applause. She glanced up intermittently to follow his orbit around the tables. When he neared theirs, she quickly polished off her last bite.

“Hello!” Jones leapt to her feet to shake his hand. “It’s nice to meet you.”

Harper sighed inwardly as she wiped off her fingers, then rose. She readied her own hand. In profile, she could tell this man was older — late fifties or early sixties, probably. He and Jones talked for a few seconds, and then he focused on Harper.

“Harper Little.” Their hands met, and her breath caught as her heart stuttered in her chest. She squeezed tight and felt like she was going to be sick. He didn’t say anything, just met her gaze with the faintest of smiles. Harper couldn’t force her face into anything. She was too riveted by a pair of eyes, beaming blue and effervescent — his eyes. 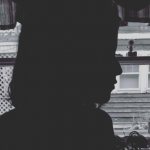