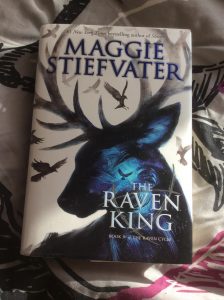 What started in a graveyard on St. Mark’s Eve ends in the mythical forest of Cabeswater in Maggie Stiefvaters’ much-anticipated final book in The Raven Boys cycle. For five years Maggie has fascinated readers with her tale of a girl who’s cursed to kill her true love and four unexpected boys searching for a lost king. Their lives and deaths have interconnected in ways no one expected. Now that the mysterious “third sleeper” has awoken, the group of unique heroes has to stop its attack and save the life of one doomed to die.

I have been eagerly anticipating this beautiful book since finishing its prequel, Blue Lily, Lily Blue. I find Maggie’s writing style artistic in all its unique descriptions, much like the authors who influenced her, such as Diana Wynne Jones. She can give wonderful characterization to just about anything, and, like many, I went into this novel with high hopes for my favorite characters and inventive deaths for my least favorites. However, like many, my main concern was whether or not doomed Richard Campbell Gansey III could possibly make it out alive.

*Spoilers from this point on *

The final book in a series always has the difficult task of tying up the story in a (believable) bow. Characters are killed, characters are redeemed, and still more characters are introduced. I was very surprised to see such an important character come into the series so late in the game. Henry is the diverse character readers have been asking for; he has a weird relationship with bees and holes in the ground, and he has excellent taste in toga parties. I honestly wish I could have seen more of him and could have seen him grow as a character and how he fits into the group.

Aside from searching for Glendower and The Raven King, we finally discover the mysteries behind Blue Sargeant and her unique amplifying ability. In the third book we finally meet Blue’s long last father, but as he disappears into a tree, we discover just how unique she really is — though I think we can all agree that Blue’s sense of loyalty and bravery came from her mother. We also see a lot of character development in this novel, particularly in Adam Parish. He comes to terms with his emotions of inferiority and no longer seeks wealth and power as his favor from The Raven King.

Now, throughout the series it becomes clear that Noah is fading. As a ghost, his energy is tied to the ley line, but even with its power he becomes increasingly unstable both mentally and physically. So by the end of the novel, when he utters his final phrase before disappearing, I was confused. Did he go willingly? Was he at peace? These questions were unclear and yet very important to readers.

This series discusses issues both magical and mundane. Each character has to face what society expects them to be and the fact that their dreams differ from that. Blue has always wanted to leave her small hometown, go to college, and change the world. Ronan can’t stand graduating because he feels like going into business would be tying a noose around his neck. Adam struggles and uses his education to leave his troubled past, and Gansey struggles with who he is when he isn’t chasing Glendower. Every teenager struggles with these emotions in one form or another, and it reminds readers that Maggie’s characters struggle with demons both internal and external as well. 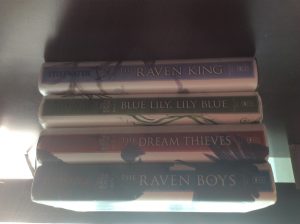 Altogether this novel was heartbreaking and poetic in all the right places. Maggie covers problems that everyone must face all while painting a beautiful world with dream thieves and magic in the everyday. This is a thrilling conclusion to the series she has been working on since she was nineteen. In a recent interview, she admitted that the last sentence in The Raven King has remained the same since the very beginning.