“No is such an ambiguous word though. What does it mean? It’s very ambiguous when someone says, ‘I don’t want you to have sex with me.’ What do they mean by that? Like, are they teasing? I just don’t know where you stand these days.” –Richard Ayoade’s satirical response to Robin Thicke’s song “Blurred Lines.”

Although comedian Richard Ayoade’s deadpan response to the number one hit single “Blurred Lines” would like to satirically indicate that the word “no” is difficult for people to understand, “no” is actually a word that three- and four-year-old children are capable of grasping (like when Mom asks if they sneaked chocolate or sugary sweets from the kitchen). 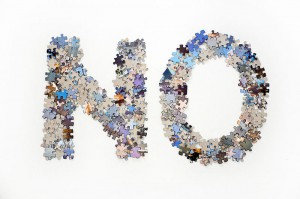 “Did you eat all the cookies in the jar?”

You remember doing it, I remember doing it. “No” is one of the first things we understand as growing human beings. Our cognitive ability does not need to jump through analytical hoops to understand that no, simply put, means no. So why has Ayoade posed the question “What do you mean by ‘no’?” It’s simple really: To the listener of the word “no,” the negative determiner no longer means no. “No” has now become an ambiguous term, specifically in the realm of the “No means yes” romantic trope that several forms of art and media have decided to adopt in the television programming, literary development, and artistic expression produced for audiences today.

Now, I’m not here to be another preacher of “Blurred Lines’” damaging implications for women and men of all ages because, as many critical writers have already written observed, the song is extremely date-rapey; but, you’ve already heard that. You’ve heard the feminist rants of sister solidarity against Robin Thicke, and I’m sure you are quite sick of it by now. To be honest, I am quite sick of it myself. It’s a new year, Robin Thicke’s song is in the past, and sooner rather than later, there will be a new number one song that everyone will be singing to in 2014.

So, if I’m not on a crusade to have Robin and Pharrell’s music careers halted for the greater good of humanity, then what am I trying to say? Earlier I said that “No means yes” is a romantic trope, and that is my initial concern because what listeners of “Blurred Lines” often fail to understand is that the lyrics are riddled with this particular romantic trope. (A trope, in case the definition is unknown, is a device or theme frequently used in different forms of art, whether it be in paintings, television and film, or literature.)

But wait, you just said that “Blurred Lines” is rapey, damaging, and harmful… isn’t that the exact opposite of romance? Well, it’s romantic in the sense that it allows for the “No means yes” trope to exist. It allows for the normalization of young men wooing young women with the line, “I won’t take no for an answer.” If anything, “Blurred Lines” is far from romantic, and personally, that is not the way I would like to be wooed. I would like it if my gentlemen callers understood it when I said, “Take a hike”; and yet, when we turn on our television/computer screens to watch a show, our hearts begin to frivolously beat a romantically rhythmic beat when that handsome leading man slow-motion runs in the rain toward the house of the love of his life, hoping for a second chance– but instead he is greeted with her angry face at the door saying, “Leave me alone.” And what does he do? He doesn’t leave. I mean, it’s not as if the light of his life said anything to indicate that his presence was unwanted… right? He instead huffs and puffs and pushes against the closing door and asks for her to listen to him. Again, we all know the trope. Guy meets girl, girl doesn’t like guy and asks him to leave, guy refuses. In its very own way, can you not hear the guy saying something along the lines of “C’mon babe, I know you want it”?

This is my concern. My concern is not the triggering words or the absolute reduction of women in a song broadcast to millions of young minds on the radio (although it was a concern of mine for many months in 2013). My concern is that the idea lives on. It doesn’t die just because intellectual writers deconstructed the song, wrote about its damaging qualities, and demanded for its creator to publicly explain himself as to why he would promote the pursuit of young women even though they’ve refused the compliments, the staring, and the insistence of men. Because what happens when your new favorite show – let’s say Nashville – introduces a new male character who is confident in his looks and fortune, and he then proceeds to pursue the young hot female vocalist who has already told him “no” dozens of times before? What happens when millions of people hear, “I need time,” or, “Leave me alone,” from an actress’ voice on television, and they hear her male co-star responding with, “I can’t give you any more time,” or, “I can’t leave you alone”?

What happens is that the discourse between the two becomes normalized.

It becomes normal for little ladies to be chased by persistent males with Crest-white smiles who just won’t take “no” for an answer.

True to form, that’s what happened when I was watching one of my favorite television shows (Nashville ). A young socialite by the name of Charlie Wentworth was introduced as the new love interest of Juliette Barnes, country music’s rising star. How did the handsome and charming Charles Wentworth choose to woo his lady love? By showing up at her home, her job, and anonymously inviting her to his polo match because he knew that she wouldn’t come if she knew he’d invited her. Each time, Juliette said, “No,” “This can’t happen,” or, “I said I need time to think.” But, confident young Charlie would physically restrain her by the arm and would disrespect Juliette’s wishes; because, why wouldn’t she like it if he dropped by for a chat even though she specifically said no?

Here’s the thing: I’m not trying to burn down your idea of what romance is (okay, maybe just a tad). What I’m trying to tell you is that with the “No means yes” trope, lines unfortunately do become blurred as to what exactly romance is. Is romance one human respecting another human’s need for space even though that one human’s need for the other is unbearable? Or is romance one human’s insufferable existence in another human’s life even after said existence has verbally been remarked as unwanted? I’m not going to say I’m disappointed in a modern writer’s attempt at creating popular content for audiences. Being disappointed is the mom’s way out of things. What I’m saying is, “You can do better.” You can do better for those watching, and you can do better for yourself. When millions of eyes are watching you or your characters play out in an arena tour or primetime television, remember that those are not just eyes. They are humans who know that “no means no” even though you are trying violently hard to make sure they think that “no means yes.” But sooner rather than later, they’ll begin to believe your words, your actions, and your tropes; because, what else have you been producing for them lately? I’ll tell you one thing, you haven’t been producing the truth.

No does mean no. A four-year-old can understand it. So, what changed when he became 16 years of age, forced a girl into a closet at a house party, and vigorously kissed her on the mouth even though she specifically demanded that he “please stop”? He began listening to the imaginary voice of a trope instead of listening to the very real human voice right in front of him.

One thought on “No: A Negative Response”