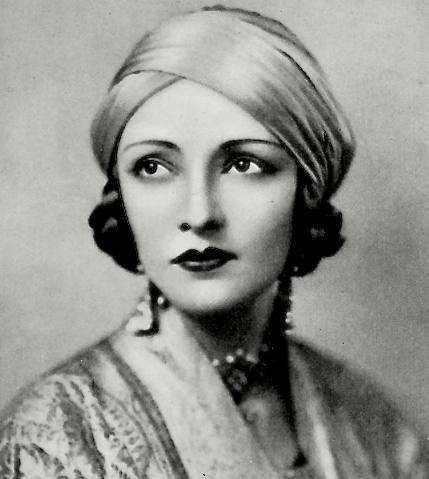 Behind every great man is a great woman.

That’s how the saying goes, right? If you read last month’s column, you know that Natacha Rambova was the second wife of the 1920s silent movie actor Rudolph Valentino. That role was not what defined her, however. She was a dancer, an actress, and an art designer — a successful career woman in her own right before becoming Mrs. Valentino. It would be unfair to say she became somebody after her marriage with “The Great Lover,” and, most importantly, it would be a lie. 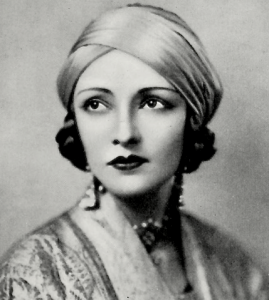 Alas, this month the Old Hollywood Spotlight shines on Natacha Rambova as we look back at her beginnings, her career, and her personal life.

She was born Winifred Shaughnessy in Salt Lake City, Utah, to wealthy parents on January 19, 1897. She was sent to a British boarding school in the 1900s, where she learned ballet and “scandalized her family by dancing professionally.” As a teenager, she had an affair with the dancer and choreographer Theodore Kosloff, who was much older than her. As a result of her parents’ disapproval of their relationship, she ran away with Kosloff. He gave her the name Natacha Rambova and made her part of his dance troupe: the short-lived Russian Ballet.

She began designing costumes for Kosloff, which he took credit for, and in 1917 she designed costumes for the film The Woman God Forgot (Kosloff’s first movie role) — revealing she was the designer. Rambova also designed movie sets, such as the set for the silent comedy film Billions (1920), starring Alla Nazimova. By that time she had gotten tired of Kosloff’s abuse, so she escaped and moved to Hollywood to become a fashion designer. Nazimova allowed Rambova to do her costumes for several years, and in the filming of Camille (1921), she met Rudolph Valentino.

Aside from her clothing designs for 11 films, Rambova was a Hollywood actress of silent films. She worked with Rudolph Valentino both on screen and behind the scenes of his films. In 1921, she played the Arab dancer in The Sheik alongside Valentino, and she appeared in four other films without him, including The Woman in Chains (1923), What Price Beauty? (1925), as a dancer in Cobra (1925), and When Love Grows Cold (1926).

Rudolph Valentino and Natacha Rambova married on March 14, 1923. They worked as spokespeople for the Mineralava beauty line by dancing the flamenco and tango while touring to promote the company.

Uncommon as it was in the 1920s for women to be powerful, especially in a relationship, Rambova was seen as controlling. Her beauty and alleged “control” over Valentino’s career had movie producers and fans upset. This resulted in Valentino ending his contract with Paramount, and when he was later signed to United Artists, the studio restricted his wife from being on set as part of the contract.

The successful career woman had become a wife, and her husband wanted her to obey her domestic role by staying at home and giving him children, but she refused. “Homes and babies are all very nice, but you can’t have them and a career as well,” Rambova said. In 1925, Rambova filed for divorce because she did not see herself as a stay-at-home mother.

A few months later, in 1926, her ex-husband died, and Valentino fans accused her for his death and considered her “Hollywood’s most hated woman.” On the contrary, she and Valentino had exchanged telegrams while he was in the hospital, and they had planned to get back together.

After her ex-husband’s death, Rambova left the Hollywood cameras to focus on the creation of her own clothing and cosmetics line. She married a Spanish aristocrat in 1932, but the marriage failed. The former actress and designer gave lectures and taught classes on universal symbolism, comparative religion, and Near Eastern art. She dedicated 20 years of her life to Egyptology, and she donated many of her acquired artifacts to the Utah Museum of Fine Arts and the Philadelphia Museum of Art.

Natacha Rambova was a successful dancer, actress, designer, and Egyptologist. Her goal was to maintain her independence and have a career despite society’s dictation of women bowing to domesticity. She sure gives truth to the saying that a great woman stands behind every great man because, before and after being Mrs. Valentino, she followed her own desires. She died in Pasadena, California, in 1966 at age 69.