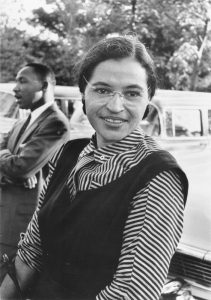 Rosa Parks is often called the “mother of the civil rights movement.” When she was arrested for refusing to give up her bus seat to a white passenger in Montgomery, Alabama, activists organized a city-wide bus boycott. It was the beginning of a long struggle which changed segregation laws forever.

Rosa Parks and her husband, Raymond Parks, were active members of the NAACP, the National Association for the Advancement of Colored People, and the Voters League, an organization that helped African Americans register to vote. Although deeply disturbed by the second-class status of black citizens in the south, Parks did not plan to protest the bus segregation laws when she was arrested on December 1, 1955, in Montgomery, Alabama. Tired from working all day as a seamstress at a department store, she simply objected to the injustice of having to stand while white riders sat.

After she was released from jail, Parks talked it over with her family and agreed to be a test case against the bus segregation laws. The black community of Montgomery mobilized that very night. Thousands of flyers were made, urging all blacks to stay off the buses. The segregation laws on city buses were bitterly resented. Ridership was primarily black, and the rules were humiliating. Bus drivers could require African Americans to pay up front and re-enter at the back door.

Parks was not the first African American to be arrested for refusing to give up a bus seat to a white passenger; but, being a middle-aged married woman and a model citizen, Parks was a sympathetic victim of unfair laws. Activists considered her to be the best chance for winning a court case.

Maintaining the bus boycott required incredible unity and organization. Cabs and carpools had to be arranged to get people back and forth to work. Martin Luther King, Jr. was elected the president of the newly formed Montgomery Improvement Association, the group which led the boycott. It took over a year before demands were met, and all citizens of Montgomery were given equal access to the bus system.

Rosa Parks sat on a bus in Alabama,
a middle-aged woman with glasses,
polite, hard-working, neatly dressed—
the kind of woman most Southern whites
hired for childcare and housekeeping chores.
Not a sassy young girl
or an angry young man,
but a sensible seamstress
whose softly spoken “no”
unstitched segregation.

Some say she stayed in her seat
because she was too tired to stand.
But she said she was tired
of not standing up
to laws designed to push her down.

The night Rosa Parks was arrested
shines in history
like the night Paul Revere rode
through the countryside
calling the militia to arms.
Citizens marched into battle
with phone calls and flyers,
car pools, and cabs—American patriots
defending the right to be free.