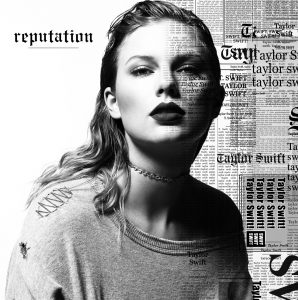 Taylor Swift’s sixth studio album has not disappointed. The highly anticipated album sold millions within the first week, more than any of her past albums, including 1989, which was listened to over 10 million times and featured six songs that reached the top 40. After buying the album, I have listened to it on loop nonstop! Sound good? Listen with me here, and read about all of her other albums in my article here.

Our second look at the album itself, and a shock for some. With Taylor “rapping” the verses, haters who already disliked the transition from country to pop were fueled with anger. This is probably one of the reasons she did it. As she has said in “Shake It Off,” they’re gonna hate, and she may as well continue doing what she loves. The chorus, however, is very much “old Taylor” as she uses less background music and slower melodies. On the whole, this track is fire and suits any occasion, from studying to dance party.

Wow. Words can’t express how “wow” this track is. First of all, Ed and Taylor are back!! With no collab since “Everything Has Changed” in 2012, this track in itself could sell into the millions — and the addition of Future? Three massive stars, one awesome track. This song is about being somebody’s spouse permanently. As Taylor, Ed, and Future all sing the lyrics “I don’t wanna touch you, I don’t wanna be… Just another ex-love, you don’t wanna see… I don’t wanna miss you like the other girls do,” we see that Taylor wants to settle down. Could the next one be THE one?

I Did Something Bad

Some say “I Did Something Bad” is the most scandalous track on the album. In the build-up to the chorus, Taylor swears for the first time in a song in her entire career. Just a common “s***,” but already there are entire articles on the topic around the world. It’s amazing how much power and influence one 27-year-old holds. Aside from the swearing, the song itself is amazing. It has a very catchy chorus (like most of her songs) and is very relatable in general. The start plays music that I can’t explain. At first it sounds like your phone is cutting out; but, in fact, it’s just the sharp notes Taylor so cleverly put together. Also, every good track has a beat drop, and this one is no exception. It is definitely a party/breakup song if I ever did hear one.

“Don’t blame me; love made me crazy, if it doesn’t you ain’t doing it right”: This is just one line of the amazing lyrics in this song. Easily one of my favourites, “Don’t Blame Me” has a wonderful rhythm and catchy chorus that nobody will forget anytime soon. I’ve probably only listened to it five times, and I already know half the words. Taylor has such a way with words that I am already in love with every song and will only like them more and more as I listen more and more. There is even one part where Taylor’s voice goes acapella, and you will get goosebumps every time.

This song is just as it is advertised: delicate. With probably the quietest verses of the entire album, this song hits a whole new level of chill. Taylor treats love as soft and flexible. With the line “My reputation’s never been worse,” we can tell she is definitely over the public hate and just wants to experience love like the rest of us. This song could never get annoying. With its upbeat chorus and extremely cool overall rhythm, Taylor wows us once again.

Look What You Made Me Do

The song that started it all, “Look What You Made Me Do,” continues to make fans excited each time they listen to it. I still remember the day it came out, being SO excited that Taylor was producing again. Others weren’t so excited, complaining that Taylor wasn’t allowed to change and that the “old Taylor” was better. AS IF! I got shivers down my spine as she said the words, “Why? ‘Cause she’s DEAD.” Change is exciting, and we should be happy for her!

A cold, hard track full of her new aura. This song resembles that of “Delicate” as it is extremely low key the whole time — except for once when she whispers, “one, two, three.” The lyrics “You know I’m not a bad girl but I’d, do bad things with you” prove to us again that Taylor has changed and is not that sweet country girl anymore — which must be liberating for her.

The start of this song begins with a young child saying “Gorgeous.” The cuteness overload proved to be more controversial than enjoyable for some; when asked who the voice belonged to, Taylor replied, “300 people know,” referring to the fans picked for her secret sessions. Other fans felt extremely left out and less privileged, which is understandable, but Taylor did NOT mean it that way, later deleting the tweet. The song, on the other hand, is beautiful, and we are already OBSESSED with the lyrics. BTW, turns out the baby’s voice belongs to Blake Lively and Ryan Reynolds’s daughter. So cute! This song might just be one of my favourites.

With a funky intro of, “No, nothing good starts in a getaway car,” this track is off to a good start as Taylor shows off her knowledge in the electronic trend. Where does Taylor get her lyrics from? Honestly, I don’t know how she writes her songs to be so cool and beautiful at the same time. This song has a sense of adventure, charisma, and a hint of mystery as she rewrites the story of a past love. She even features “Bonnie and Clyde” in a romantic, thrilling track as we near the end of the album.

King of My Heart

A sense of hope appears in this tune. “And all at once, you are the one I have been waiting for”: This line gives us reassurance that Taylor is keen to fall in love, properly and for the last time. The song itself is a story of meeting someone — being fine alone but, once meeting someone, being 100% sure that this is what she wants. It presents hope to younger listeners: Love can happen at any time, wait for it, don’t rush it. Feel what it’s like to be alone first.

Dancing with Our Hands Tied

A more intimate track, much like the next one. It is about falling in love and risking everything to be with someone. It’s about that love that everyone craves — the dancing part without the stress and fights that make up a real relationship. Taylor treats the dance floor as a safe place for successful relationships and takes us there, encouraging us to follow and try it ourselves.

Immediately one of my favourites from the get-go. I remember listening to the chorus and thinking, “Yep, this is the one.” Her most romantic, intimate track of them all, “Dress” tells a story of craving that pure part of love one step further than dancing. Not only is it intimate, but it’s also scandalous as this love is treated as a secret: “Our secret moments in a crowded room, they got no idea about me and you.” The line “I don’t want you like a best friend” is the first one I really heard while listening to this song. For those of you who are very familiar with Taylor, you may remember the lyrics from “You Are in Love”: “One night he wakes, strange look on his face, pauses, then says, you’re my best friend, and you knew what it was, he is in love.” This line seems to contradict her new song. Perhaps Taylor has learned? Or perhaps her priorities have changed? Anyhow, “Dress” is a beautiful song, and listeners will love the part where she stops singing for a few seconds after the line: “Say my name and everything just stops.” Literally. This one is definitely going to be a popular tune.

This Is Why We Can’t Have Nice Things

My favourite from her entire album!! If you haven’t heard this one yet, you’re missing out. If this one doesn’t become one of her most popular from this album, I’ll eat my hat, maybe five. After the second chorus, in the bridge, Taylor lists different people and toasts them. When she gets to the bottom of the list, she refers to “you” as the person the song is taking a dig at. In the bridge, she sings, “And here’s to you, ‘cause forgiveness is a nice thing to do,” before adding, “hahaha, I can’t even say it with a straight face.” Such a new Taylor move to once again get rid of the haters and make all of her fans laugh. Aside from this part, the entire song is actually genius and sooo catchy. I love the tune more than any other song, and the speaking/laughing part just makes me love it even more.

Call It What You Want

This one is the last of the songs she released just before the album. It is similar to some of her songs from 1989 in that the background music is similar, and even the lyrics have the same sort of feel. They resemble that of a fairytale, which also takes us back to Fearless. The “old Taylor” is still in there, perhaps more knowledgeable and self-aware than she was at the beginning of the album. Reputation is a journey.

Speaking of the “old Taylor,” here she is. In this soft, lyrical piece, Taylor proves to us what we suspected in the last track: She hasn’t changed that much at all. Taylor’s raw voice could honestly do an entire song without music, and we’d still rush to buy it. This song is the closest to that as we are going to get. The melody could belong in Fearless, as it resembles “Best Day” (the song about her mother) and fits right into her old rhythm. Multiple recordings of her voice are placed together in a chorus kind of way as she sings, “Please, don’t, ever become a stranger whose voice I could recognise anywhere.” The title “New Year’s Day” matches the song: the end of something but the beginning of something else. It may be the end of the album, but it is the beginning of an entire new tour and Taylor Swift era.

On the whole, Reputation is a big success. Towards the end, we make a discovery: There are multiple Taylors in there — as we see in the “Look What You Made Me Do” music video — and all of them put together are what we, as fans, accept and enjoy listening to. As I said earlier, Reputation IS a journey, not only for us but Taylor too as she discovers herself and her many layers. Every version of Taylor is in there: Fearless Taylor, Speak Now Taylor, Red Taylor, and 1989 Taylor. Put all of these together, and what do we get? Reputation. Congrats, Taylor, on another spectacular album, where we are gifted with the best message of all: Taylor is not merely “new” or “old,” but she’s just beginning to present every version of herself that has always been there. True confidence and support from fans got her here. And now? We enjoy it.

One thought on “Reputation: A Song by Song Summary”