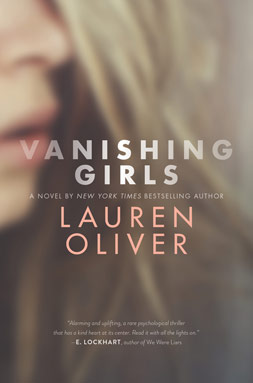 Hello, Germies! Recently, I was given the incredible opportunity to review bestselling author Lauren Oliver’s upcoming book, Vanishing Girls. You may know some of her other works…namely Before I Fall, Delirum, Pandemonium. When it comes to book-writing, this lady has been around the block and knows her stuff, and it shows in her latest novel.

Dara and Nick used to be inseparable, but that was before – before Dara kissed Parker, before Nick lost him as her best friend, before the accident that left Dara’s beautiful face scarred.

Now the two sisters, who used to be so close, aren’t speaking. In an instant, Nick lost everything and is determined to use the summer to get it all back.

But Dara has other plans. When she vanishes on her birthday, Nick thinks Dara is just playing around. But another girl has vanished, too—nine-year-old Elizabeth Snow—and as Nick pursues her sister, she becomes increasingly convinced that the two disappearances may be linked.

In this edgy and compelling novel, New York Times bestselling author Lauren Oliver creates a world of intrigue, loss, and suspicion as two sisters search to find themselves, and each other.

Vanishing Girls centers around the connection between two sisters, Dara and Nicole (Nick), and how their lives are affected by a fatal car crash and a subsequent, mysterious kidnapping.

Since this book isn’t out yet, I’m not going to give away any spoilers. What I will say is that I loved, loved, loved the way that Lauren Oliver built up the relationship between the two sisters. Even though I grew up with two younger brothers instead of a sister, I can absolutely relate to the bond between Dara and Nick. Several times throughout the book, Oliver shows just how far you can (and will) push yourself for your siblings. With these two girls in particular, their connection was so strong that it was almost as if they were the same person; yet, at the same time, you knew that they were two separate individuals. And this wasn’t even done in the way that I’ve seen from other books where you have blatant comparisons (“She was the perfect older sister, and I was the rebel,” or, “She was the innocent younger sister, and I was the scandalous older sister,”  blah blah blah; we’ve read it all before). It showed how much care Oliver took in the writing of this book, and if there is one thing I can always appreciate, it’s an author who does their research. I’d like to take this opportunity to thank you, Ms. Oliver, for taking such great care with this book.

Now, back to business.

The storyline was so compelling. Normally it takes me a week to finish a book, but as soon as I picked this one up, I absolutely could not put it down — to the point where I stayed home from work to finish it. I mean, I called out of work for an entirely separate reason, but it ended up being the perfect day to eat this prose up, man. Oliver keeps you guessing throughout the book as you try to keep up with the two sisters as they struggle to solve the kidnapping.

The journey this book takes you on is insane. You start off pretty much at a full sprint with the accident, and then you have to navigate the aftermath of it that is affecting the family, Dara, and Nick as they deal with it. Then, you have to cope with the fact that a nine-year-old girl was kidnapped, and then, of course, there’s a twist. In addition to all of this, the book’s perspective switches between the sisters, both before and after the accident. It’s a ride, friends — strap in.

Overall, Oliver has this amazing way of writing that just sweeps you away. I felt like I was in their hometown of Funland, visiting the seedy joints, and sprinting alongside Dara and Nick to save my own life. It was a type of writing that I honestly haven’t experienced in such a long time. This was my first Lauren Oliver book, but if this is what she’s delivering, it certainly won’t be my last.

Seriously, go add this book to your “must read” list!

Vanishing Girls will be available March 10, 2015. Just one month away!

One thought on “Review: Vanishing Girls by Lauren Oliver”