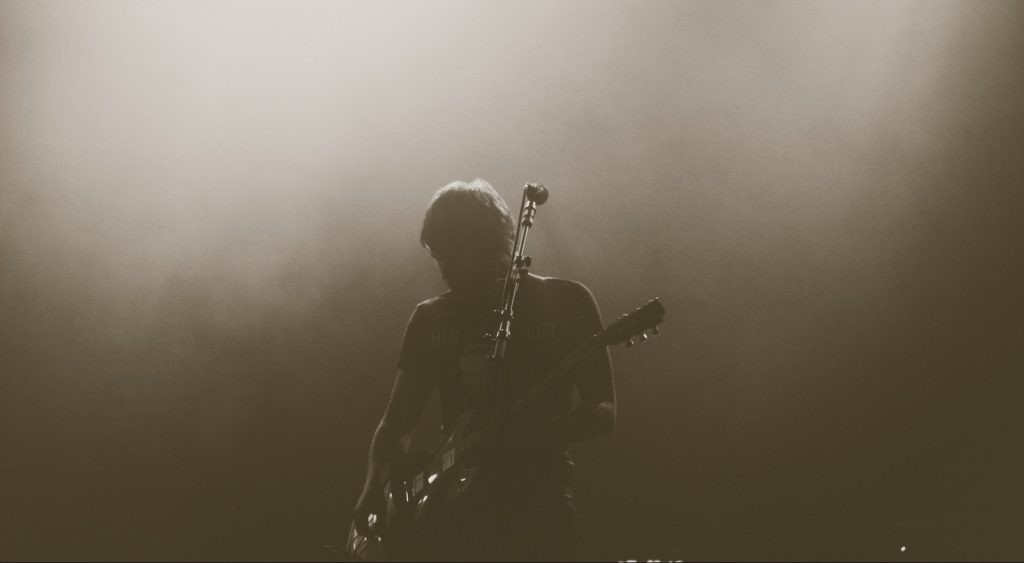 My hands shook as I opened my bass case. Can anyone see them shaking?

I fumbled to clip on the guitar strap, which was suddenly impossible. I couldn’t even feel my fingers. I dropped my only guitar pick, bent to retrieve it, and made the strap fall off again, which almost made me drop the bass on the floor. Shakily, I sank into the broken springs of the green room couch. The heavy bass guitar served as a kind of emotional paperweight, holding down the nervous shivers breaking out all over my body.

Across from me sat my bandmates — Robert, Gary, and Joe — and they looked nervous too, although all of them were veterans of the music scene and had been on stage countless times, and I’m sure they weren’t about to wet their pants as I was. It was our first performance as a band, and we’d only been together two weeks, so nobody knew how it was going to go. We’d lucked out when a friend’s band, Raw Head Rex, couldn’t play their show and we were asked to fill in for them. The only problem was that it was at the WOW Hall — a big venue for a brand-new band and not the place I wanted to cut my teeth.

But I had no choice. If I quit, or refused to play, I would never live it down. I had to do it. No matter how much I didn’t want to. There was no way out…

It all started two weeks ago when I got a note pushed under my apartment door that read simply: “Do you want to be in my band? Love, Robert.”

In that moment, I didn’t even hesitate. With no hesitation my heart hollered, “YES! OF COURSE, I DO!!!!!” And I was instantly committed. I would do whatever it took to be in Robert’s band. Never mind the fact I didn’t really know how to play the bass, I’d never been in a band before, I was terrified of performing in public, I wasn’t a “cute” girl, and I was a secret introvert who liked to go to bed at 9pm.

This was a golden life opportunity, in my opinion — one of those unique opportunities that defy all other priorities, the kind of chance you must leap at or forever regret not having done so. So, against my nature, and against all odds, I took the leap and joined the band.

Now I was having second thoughts. Backstage at that first show I waited helplessly, feeling like I was about to climb the scaffold. We could hear the audience getting excited for the show, and the squeal of the sound system made us all jump as the sound man turned on the mics.

Then we got the signal. We were on. Joe started drumming like the pro he was, and I, feeling as though I was about to die — climbed the stairs to the stage, my knees literally knocking, a stupid smile on my face, and picked up my bass. Somehow, I could play it, but my fingers were shaking badly, and I remember being grateful that the first song only had two notes. My knees shook so hard I had to stamp the ground with my boots to keep them steady. The sound was terrible, and we were out of key. Joe and I looked a little desperately at each other as Robert played the wrong chord, and then started singing at the wrong time.

Our guitar player, Gary, broke the tension and saved the day when he ran out on stage with his heavy metal Flying V guitar, a polka-dot blazer, and his hair in a sumo wrestler top knot. The crowd screamed with joy, and we all tried to pull it together, if only to do Gary credit. After that it was easier. The crowd — made up of mostly friends — seemed to love us in all our untuned, unpolished cacophony, and we made it through our short, five-song set.

I never thought I’d make it through that first show, or any of the ones that followed — but I did. Thus began a nine-year journey with my band Oswald Five-0, which included two full-length CDs, many singles, and northwest music compilations as well as a tour across the US and into Canada. Not bad for a girl who thought she’d puke all over the green room! 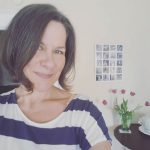 Diane Rios lives in Portland, Oregon, with her husband, Greg, and rescue dog, Faye. Her passion for the forests and coastline of Oregon stem from her own childhood spent living in the woods with her artisan parents. Real-life Oregon places mix with fantasy in her debut novel, Bridge of the Gods, book one in the Silver Mountain Series. The middle-grade fantasy, praised by Gayle Forman, is available on August 15th.