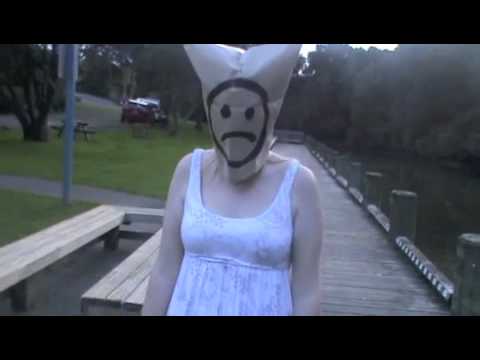 This is a short film made by students for a film-making project.

Filmed on the Warkworth Riverside Boardwalk

If you pass her in the street, her life is nothing more than a single emotion displayed across a brown paper bag. This is the story of her quiet walk along a wharf, encountering people who illustrate her fluctuating emotions. “The paper bag girl” lives a life happy, sad, angry, and any other feeling which you have most likely experienced. Despite her unique lifestyle, sights of different groups of people along the wharf show she is lonely, isolated from her peers by the bag which masks her identity. Just as she feels like the only one in the world who is different, this “boy meets girl” story reveals itself, as a young man seats himself on a park bench close to her, also wearing a paper bag over his head. Edging closer to her, she reciprocates his every move, anticipating a romantic rendezvous with this mysterious young man, but he has something different on his mind…