Eleanor lifts her bleak blue eyes to the burning world above her. Brilliant shades of crimson cascade across it; sunny yellows streak the smoldering sky like oil paints; violets hide behind smears of magenta.

It’s so bright, for a while Eleanor can’t make out the sun. When she does, it’s simply a pale smudge in a bursting wildfire. It hangs low and heavy in the sky like a pregnant belly, grazing the faraway horizon.

They’re at the cabin again and so much is the same. The basement remains unfinished: the ugly, burnt orange hardwood flooring only reaching halfway and the walls only painted one thin coat of green. The wallpaper in her parent’s bedroom is still pale blue with scatterings of small onyx fish, and the tree house in the forest at the front of the cabin is perched creakily among the evergreen trees. The skinny latter leading up to the cutout door remains covered in ants and sticky sap. The small tree house used to scare Eleanor: it is two stories, sways when you move too harsh, and contains dirty sets of pots and pans that were there when she first came. Now, she likes to sit on the top floor and look out the window, feeling the damp August breeze on her bare shoulders as she reads.

Even the wooden “It’s five o’clock somewhere!” sign still sits crooked beside the front door. The chipped paint shows swimsuit-clad adults sipping on beer and smiling. Eleanor’s parents always promise they’ll take it down each year, but when the three of them walked through the door this year, it didn’t seem important. Not with one less person than usual.

The three tall windows’ blinds are down, hiding her wailing parents inside. She moves her gaze to the narrow hot tub sitting by the two large, sliding glass doors at the right corner of the cabin. She can picture her three-year-old self in the warm water, wearing a lifejacket, floating aimlessly. She can hear her young, squeaky voice blaring out the words to the rubber ducky song as her tiny hands grip the rubber duck she never swam without.

Eleanor loves the cabin; she always has. She loves the way the campfire crackles and the sparks glide gracefully up into the sooty skies. She loves the way she can bury herself under her blankets in the bed in the loft: hide under the duvet cover, take in the smell of freshly fallen rain that always sticks to her sheets, simply envelope herself in a world only containing the smell of rainfall, the eerie pitch-black, and the soft patter of wind tapping on the triangular window by her bed. Not even her darkest thoughts can find her there.

They weren’t supposed to come here this year. After Simon died, there didn’t seem to be much of a point. But Eleanor begged — literally got down on her knees and held her hands out to her parents who stood there cold and distant like Greek gods deciding the fate of man. Finally, one early August morning, her dad claimed she was being embarrassing and gave in. The next day, the bags were packed, and they made their way on the familiar, winding roads.

The doomsday sky waters down until, gradually, it becomes coated in thick ebony, pinpricked with millions of tiny stars. Eleanor continues to stand there. She does not move until her knees start to ache with the weight of her tired bones. She just stands there looking into that great, big, black abyss and whispers countless words to Simon. She watches her grief being carried in the summer winds, away with her words.

Eleanor talks to Simon when the missing becomes so bad that it’s like a person walking beside her. It’s as if the grief is so big, it’s a shadow that always walks in front of her, making itself known before she can even enter a room. The grief: it’s like she’s holding a paper cup under a tap and watching it overflow, and even though she wants to take the cup away, she just stands there, like a fool, watching the water pour out as her hands grow wrinkled and numb.

Finally, the air becomes still, dense, and heavy with August heat, and Eleanor walks inside. The dull lights of the cabin remain on, but her bellowing parents have already gone to sleep. She sighs.

The orange wood paneled walls are rough under her palms as she makes her way to the loft. Eleanor doesn’t bother turning off the lights, instead just climbs into the creaky bed and pulls the blanket up and over her so she can’t see the coke bottles Simon lined up on the windowsill and refused to take down. Even though it’s too hot for the duvet cover, even though she’s suffocating in over-used air, Eleanor doesn’t dare escape this jail she has made for herself because there’s another jail outside and it’s so, so much worse.

Her parents are screaming at each other when Eleanor wakes up.

She is stained with sweltering sweat. Their pain-soaked voices are trees growing out of new soil, rising up and up and up until their tops touch Heaven and their roots touch Hell; each crisp leaf laughing at Eleanor, small chimes of teasing giggles, whispering catch me if you can, catch me if you can.

She walks downstairs. They always stop yelling when they see her.

Her mother has her knees pressed against her chest; she’s curled up on the stiff couch, pushing herself further into it like she can become simply a stain on the cushion. Her cheek is leaning against her right knee, facing opposite to Eleanor. All Eleanor can make out of her mother are blurs of color: a smudge of green, a smear of black, and a blemish of chestnut brown.

Her father’s body is facing her mother’s, and he’s towering over her with a curving back, reminding Eleanor of a scared cat. His head, however, is turned towards Eleanor. His tawny skin is tinted a flushed red, his pepper-grey hair falling over his ice-blue eyes.

“Eleanor,” her dad says, or, more accurately, booms. Her dad is something of a giant: total muscle builder, way too tall, with a deep, thunderous voice. His huge presence enters the room before he does, much like Eleanor’s grief. It’s kind of terrifying.

“Hey, Dad,” Eleanor chirps. She’s uncomfortably slick with sweat — a small glistening of damp perspiration gleams on her chest like she’s been out running.

Eleanor’s mom remains pushed up on the ugly sofa.

Eleanor waits a heartbeat more for her mother to acknowledge her. When she doesn’t, she says, “I’m going swimming in the lake.” She moves towards the door.

Her dad frowns. His thick, black eyebrows meet together in the middle when he furrows his brows. Eleanor remembers fondly that Simon used to tease him mercilessly for it. “In your pajamas?”

Eleanor looks down. Right. She’s still wearing her loose volleyball t-shirt and athletic shorts, each clinging to her body tightly. She barks out an awkward laugh. “Right, yeah. Too early for my brain to function, I guess…”
At that moment, Eleanor’s mother pops her head up and looks at her daughter. Her moss green eyes swim over Eleanor’s small body, her messy ponytail and the frantic look in her eyes like she just walked into something extremely personal. Which, she had.

Eleanor smiles. When she smiles, it’s like a door opens up, and on the other side is a burst of light. It takes up her whole face; it’s exhausting just looking at her. Blinding, too.

“And,” her father states, “be careful.” The whole world rumbles under their feet at the sound of his voice. An earthquake, her mother used to say, Your father is an earthquake.

Eleanor’s mom looks at him with that secretive smile of hers, looping her body to sit up straighter and look at her husband. A wave of hope rises in Eleanor’s chest, giving her the feeling that she’s about to sob: a big, beautiful boulder stuck in the middle of her throat.

It flutters in her stomach as she changes into her swimsuit. It flourishes into the size of a whale as she takes big steps into the stinging water. All of her organs working to keep her alive whisper the word so with every beat of her heart she can feel it: that paralyzing hope.

As she sinks further into the water, looking up at the fresh morning sky already laced with heat, she can feel it coursing through her.

She pulls herself deeper underwater until she’s completely submerged. Her hair fans out around her, her thick brows furrowed like her fathers, thin lips pursed like her mothers. She can remember, vividly, Simon and her lying on the dock as the waves rolled below them, whispering to each other plans for the future while looking at the great unknown above them. If she had known he was going to die, Eleanor would have told him she wanted him in her future more than anything else.

Her heart wrenches at the memory, tightens and loosens each time bright green eyes pop into her memory once more. It will always feel like this.

Her whole body emerges clumsily from the wintry waters. The grief is overflowing out of her — another person swimming silently beside Eleanor. So she looks up at the sky and sends small messages to her little brother from the back of her mind: I’m okay, Simon and I miss you.

Tears prick the corners of her eyes, and she floats on her back with her arms and legs spread out like a starfish. A smile tugs at the ends of her lips. Her chubby cheeks and hooked nose are turning red from the frigid lake. She drifts peacefully like that for a while.

She can almost hear Simon in her ear, whispering the same words he always did when he comforted her: You’ll always be okay, El, even if the whole world crumbles around you.

Even if her parents are never the same and even if her grief sleeps beside her every night, Eleanor will be okay. She looks up at the sky one last time before walking into the cabin. Small clouds dot the azure skies, and the sun is a bright, blinding smudge. It casts everything in a burst of light.

(Even if the whole world crumbles around you.) 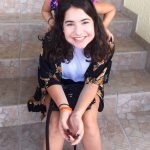 Molly Klassen is 16 years old living in Canada with her family. This is her first published work.