I discovered All The Bright Places by Jennifer Niven this January. The main character Finch was prone to bouts of wanderlust, so in order to pay respect to the character and the authoress, I brought my copy of ATBP with me on a wander around my city.

Hanoi (for those who don’t know) is not only the capital city of Vietnam but also a rare gem of said country. It’s a city full of traditional values but also full of innovative people. It is truly one to visit.

On my wander, I visited Hoan Kiem Lake (the most well-known lake in Hanoi) and the Old Quarter. The streets, on my way there, had so much history. They made me well up just thinking how much suffering the city had gone through.

Every soldier who had marched these streets, who had sacrified for the life of millions, their ghosts were all here. I could still see the scars that wars and violence had left behind. The hospital that was bombed back in 1972 has been rebuilt? Or has not? I could still see Hanoi Hilton (Hỏa Lò Prison), which has been made into a museum to remind my people of the adversity all of us had to go through to get to where we are today. To leave something there, I did as Finch would have done, I did my best to leave a pencil in one of the prisoner’s cells (hopefully it won’t be spotted). And yet, for all the suffering, this area is beautiful too.

The Old Quarter is one of my favorite places in Hanoi. It is so crowded with foreigners yet still forever radiates the nostalgic vibes. Everywhere I looked, the people were so busy, caught up in their work, they didn’t seem to be able to stop, take a moment to look around to see the beauty that is around them. Hanoians are known for our hectic, fast-paced lifestyle. I ate street food, and it reminded me of how amazing my childhood was. The taste of that delicious hot bowl of pork porridge was reminiscent of all those times I got sick and my grandma made me various different kinds of porridge, with everything ranging from broccoli to mussels. Oh what a childhood! After that, I just tried walking around the Old Quarter, thinking of everything that Finch would do. I bought myself some violets that day and left some petals at the best hidden place I could find.

In the afternoon, I went to the Temple of Literature, which was the first university in Hanoi. It was built in 1070, therefore the place is more than 900 years old. There were 82 stone tortoises in there, each of which bears on its back a stele engraved with writing. Knowing Finch, I specifically made a Post-It and stuck it on the back of a stele. It was a temple filled with exceptionally bright scholars who all left some kind of legacy. It was so fascinating reading all about these people, what they were like, and what they left behind for our generations. Jennifer Niven was right all along:

“The thing I realize is, that it’s not what you take, it’s what you leave.”

I went home that day feeling a little more mature, a little more grown yet still so childish. My wanderlust is never-ending. What I found is that, if you don’t stop to look closer, you’ll miss out on everything around you. Yes, true, I had never experienced such nostalgia before. I had never felt as patriotic than on that day. I am thankful that I’m living in such a historical place. Hanoi is such a fascinating place that I might need to make some more strolls to truly understand. 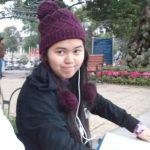 One thought on “Wandering Hanoi: A City Full of Nostalgia”