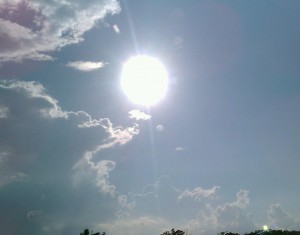 That sun burned in an odd way that summer, hotter with wicked solar flares and meaner with intense magnetic disturbances. The crazy heat of it had crisped the skins of EmLee, Cathy, and Morry as they walked along doing nothing. Glad to reach the shade of the big magnolia, the thirteen-year-olds sprawled beneath its arching branches. Morry settled down with his new puppy on one side of the wide-trunk tree, and the girls lay together on the other.

Together, they picked off empty cicada shells attached to the underside of the tree’s rough branches and bunched them in piles like tiny dead soldiers. The monotonous dirge of the remaining few insects seemed to box in the world, and the world thrummed with the noises of a vanishing summer.

Both girls lay on the earth with their shoulders touching. EmLee looked over at her best friend, resting with her eyes closed. Purple shade dappled Cathy’s face and neck and EmLee took in the contours of her delicate collar bone. EmLee touched her own clavicle and found the chain of her necklace. She pulled on the pendant and rubbed the etched word Friend, a partner to Cathy’s half, Best.

“I see you,” said Cathy, one eye opened partway. “Stop. I know what you’re doing.”

EmLee braced up on her right elbow and a slow smile stretched across her mouth.

Cathy suddenly looked at EmLee. “I said stop. Don’t you get it? It was just a kiss. You can’t go falling in love with me. I’m a girl.”

EmLee grinned and lay back to the earth. She picked another empty bug shell from the limb above and set it on her finger like a ring. She looked sideways to Cathy and said, “But it was a good kiss. Our first.”

Cathy faced skyward again and gripped the limb above them with both hands. “So?”

“So this,” said EmLee, lured in by the cut of her best friend’s cleavage. “It’s a free country. I can look all I want to.”

“It was just practice,” whispered Cathy sternly. “Don’t forget it.”

From a block away, the throaty sound of a sports car rumbled toward them. Gerry Boon pulled his gold convertible to the stop sign and his friend Wid pointed to them lounging beneath the tree. When the girls ignored them, the two boys became mouthy and full of mischief, eyeing Morry with Pup.

“Whoo, Retard! You ain’t bothering the babes, are you?” shouted Boon.

Wid licked his lips and, talking to the shy boy behind him in the car, he said, “Looks like they could use a little privacy.” The boy behind him looked down.

“Come ride with us, Einstein. Let the girls have some fun,” hollered Boon. “Hey EmLee, we heard what your daddy did to you.”

EmLee’s head snapped up and she glared at Boon. Cathy sent her a quizzical glance as Wid slapped the side of the gold car.

The puppy awoke and began pouncing on Morry. Cathy braced up on both elbows and tilted her head at the rude boys. Boon’s handsome eyes landed on her, so she disregarded Wid but smiled at Boon. He revved the Pontiac’s engine and pulled away fast. Black tires squalled on hot gray pavement; heat waves broke into a crazy spin.

EmLee’s jaws worked as she watched them leave. “Dumb-asses,” she mumbled.

Cathy said, “Did you see the one sitting in back? He was really cute.”

“God, Cathy. Is that all you can say?” EmLee frowned. “Didn’t you hear what they called your brother?”

Cathy lowered her voice and asked softly, “What’d he mean about your daddy, Em?”

EmLee pitched a magnolia cone to the corner. “Never mind—I don’t give a shit about that. I just hate them calling Morry names.”

“Watch your mouth, girl. Morry may’ve been born face-up and backwards, but he’s still smart enough to repeat everything you say.”

EmLee glanced around the tree at him playing with Pup. She sighed and looked directly at Cathy. “They shouldn’t talk to you that way either. Makes me want to punch them.”

Again, the curves of Cathy’s chest captured EmLee’s attention and she was caught in the act of staring. Cathy grinned with pride, lay back, and sent her hands down to squeeze the new fullness of both breasts. “They are getting big, aren’t they?”

“Shut up,” said EmLee, hiding her comparably smaller breasts in the crossing of her arms. “I gotta get going. Charlene’s probably worried where I am.”

Cathy pulled herself to a low squatting position, looked with big eyes to EmLee, and said, “Em, don’t be a goose. Your mama’s never worried about you.”

“Did you, or did you not, see that dark-haired one in back? He was so cute.”

“Yeah I saw him. So what? If you hang with creeps, you are a creep.” EmLee spit and turned away.

Cathy sat back and said, “You ought not to spit like a boy, Em. It’s not becoming.” She reached over to untangle the half-heart pendant around EmLee’s neck and EmLee grabbed her wrist.

Cathy glanced at the rough touch and said, “Ow, Em. Why you so mad? Morry doesn’t even know they were talking to him. Pup’s the only thing on his mind.” She wriggled her hand to be free.  “Let me go—and just let those boys be creeps if they wanna be.” EmLee released her. “They’re just jealous that’s all.”

“God, Cathy, you are so thick. They’re not jealous. They’re just dicks.”

Cathy made a face at EmLee. “You’re in trouble now.”

The puppy yawned and licked Morry’s lips. EmLee crawled out from under the tree and brushed off the back of her shorts.

“I’m going,” she said and Cathy followed her, watching as her best friend stretched for the eight-block run home. She surveyed the lengthy quality of EmLee’s legs, the muscular build of them, and their sure step as EmLee warmed up for the run.

Sitting in the grass at the edge of the tree, Cathy rested her chin on her drawn-up knees and caressed the backs of her own thighs. “Em, don’t go. Walk home with us. We can look at TV or something.”

EmLee cut her eyes to Cathy. “I gotta check on Charlene. Nobody’s with her. Lucille went in to work today. Char’s been alone all morning.”

“I think your mama’s fine, but suit yourself.”

The puppy spilled into Cathy’s lap and she laughed. Morry plopped beside her.

Cathy took his hand and they left, walking on top of their own dark shadows.