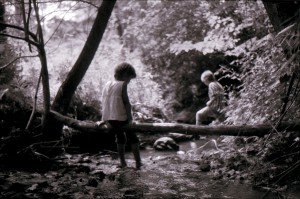 Martini’s was a small family-run grocery store, just a five-minute drive from Grandmom’s house. I hadn’t been in yet that summer, what with all my softball practices and games. When we got there, Mr. Martini greeted my grandmother with a hug. She had been his teacher in high school, and had known my mom and dad growing up.

“Special on cherries, Mrs. Carter,” he said. “All the way in the back.”

“Look at you,” he said to me. “You’re turning out to be just as beautiful as your mother.”

I smiled. Beautiful wasn’t a word directed at me too often.

Almond shaped? Was he saying that because he was a grocer?

“And why hasn’t she come to see me yet this summer?

“Mom and Dad aren’t here this summer,” I said. “Not yet.” I wasn’t about to tell Mr. Martini they were back in Delaware plotting their divorce.

We both looked up and down the candy counter.

My grandmother returned with cherries and a pint of Breyers Vanilla ice cream. Mr. Martini said something about how lucky she was to have such a lovely family and she thanked him and said, “Tootaloo.”

I handed Mr. Martini a dollar and picked out all the old-timey kinds of candy—Mike and Ikes, Bit O’Honeys, a candy necklace. I asked Mr. Martini to put a box of candy cigarettes in a separate bag.

I put my necklace on and chewed a few pieces. I sat down on a stool and looked at the Coca-Cola sign collection on the wall. They were signs from my grandmother’s time, I knew that. My grandmother was older than other peoples’ grandmothers. Mom had told me she was something of an oddity, having Mom when she was almost forty.

“Did my grandmom look like that when she was your teacher?” I said.

Mr. Martini turned to the Coca Cola ladies. He pointed to a blonde. “She looked most like this one,” he said. “But your grandmother didn’t smile a lot. She was our teacher, not our friend.”

I offered Mr. Martini a candy cigarette. He refused, until he saw I was going to sit there and puff on one.

I puffed and nodded. The powdered sugar of my cigarette fell to the counter like snow instead of billowing up into the air like real smoke.

He was working alone and the store was empty.

“Were you the one that wanted to marry my mom before my dad did?”

“I spent a lot of time in the woods with your mother,” he said.

I snuffed my cigarette and nibbled on some of my necklace.

“No, no!” Mr. Martini said. “We were good kids. Grew up building forts together. Played Pilgrims and Indians, shooting each other and making peace over picnic lunches we’d make from pinecones and bugs and such. Your mother and I wore feathers in our hair and smeared clay on our faces and danced on rocks. Then in high school, she stopped being a tomboy. She grew so pretty that I asked her to marry me when we were only, what, fifteen. I didn’t want to lose her. But of course, I did.”

Mr. Martini puffed on his fake cigarette. “Lucky for her,” he said. “Look at you.”

“She was my buddy. You know how it is. We read each other books and things. And then your daddy moved to town.”

“Did you ever kiss her?”

Mr. Martini tore the paper off his cigarette. He chewed the gum.

“I kissed your mother once.”

“No, no. On the cheek. She was crying her eyes out. She had run away from home. Well, for the day. That’s what we all did when we were seven years old.”

“She was crying her eyes out because you kissed her?”

Mr. Martini pulled out some Pixy Stix from behind the counter. He downed one, then another.

“Your grandfather used to have a field cleared in the woods. He used to grow corn and other veggies there.”

“His tractor hasn’t worked since before I was born,” I said.

“Well back when it did, one day he was out discing the field and he hit upon some artifacts. I don’t remember what all he found, except for the neat thing he let your mother bring to school for show and tell. A big round stone with a face carved in it.”

“Big enough that us kids had to hold it with an open palm. But we only got to hold it once. Your mother’s teacher stole that stone from her. She kept it and blamed your mother for losing it.”

I pictured my mother going home that day and telling my grandparents she had lost an ancient Indian artifact. I saw them telling her she wouldn’t be trusted with anything special ever again. I saw her packing a little suitcase and running as fast as she could away from the house to deep in the woods where she would always meet Mr. Martini.

“That’s not the worst thing that teacher did to your mother.”

I figured Mr. Martini was going to stop there.

“That teacher taunted your mother the rest of the year, because she couldn’t pronounce her Rs. She would ask your mother to read aloud, just to point out all her errors. Can you believe that?”

I shook my head. I could hear my mother singing that Joni Mitchell song— River. Her Rs were very strong now.

“I should’ve been a braver boy and stuck up for your mother. I should have fought for her.”

I studied Mr. Martini’s face. I looked at his hands. He wore a wedding ring. I had never, in any of the summers visiting my grandmother, seen his wife in the store.

He handed me another candy necklace.

I walked slowly back to Grandmom’s house, along the railroad tracks. I sat on the rails and puffed on another candy cigarette. Maybe I would tell Grandmom about Mom’s mean thieving teacher. I bet the woman still lived in town. I could ride my bike to her house, knock on her door, and force her to hand over the Indian stone with the face carved in it. I wanted to give it back to my mom. I wanted to tell my mom I had broken her old teacher’s arm.

I gave my grandmother the candy necklace when I got home and told her I had a stomachache. In the bedroom I was sharing with my sister that summer, Mom’s old bedroom, I stood in front of the mirror. The mirror was big and round, engraved around the edge, with two low dresser drawers attached to either side. Mom had told me it was an antique make-up mirror that had belonged to her great-great-grandmother. I sat down on the little silk-pillowed bench in front of the mirror and ran my hand over the swirls in the wood. 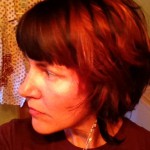 Christine Fadden roams around. She has lived in a dozen states and a few foreign countries. Her fiction and nonfiction have been published in the American Literary Review, Gulf Coast, Painted Bride Quarterly, Storyglossia, PANK, The Louisville Review, and elsewhere. As a teen in the 80s, she worked as a pool lifeguard and she sometimes skipped school to stay home and watch MTV. She does not recommend skipping school. “Read Aloud” is an excerpt from her novel, The Geometry of Changing Course, for which she is seeking representation.

Cheyenne Montgomery lives with her three children, four cats, nine chickens, a Great Dane, and the love of her life, Amy. She doesn’t think kids are cute; she thinks they should be taken seriously. You can see more of her photographs on Flickr.

One thought on “Read Aloud by Christine Fadden”