The Story Behind ‘The Way I Used to Be’: An Essay by Author Amber Smith

I’ve always felt a need to explore the tough subjects — trauma, violence, social justice. These are the issues that fuel me creatively. They are the ones that keep me up at night and inspire me to ask questions, to understand further, and to try to somehow make a difference. Sexual violence, in particular, is an issue that has always been close to my heart. It’s a topic that I’ve carried around for a long time but was never quite sure how it would figure in to my work as a writer.

Coming from a background in the visual arts, I had worked with the themes of trauma and sexual violence time and again over the course of a decade. Often, it was a way of simply trying to work through my own thoughts and emotions surrounding this topic, to take my feelings of frustration, confusion, anger, and fear and turn them into something constructive. I had always used the dual practices of art and creative writing together, as part of a mixed-media approach. But it took many years for me to recognize that what I had been trying to accomplish through visual art was in fact a form of storytelling, and one that would — for me, anyway — be better served with words rather than imagery. As I began to use writing more and more on its own, I was eventually able to make the leap into writing — a move that truly opened up my creative world.

I’ve always been drawn to the coming-of-age story. Those teenage years can be such a volatile and beautiful time, full of both pain and joy. These early experiences stick with us, for better or worse, and they mold us into the people we become later in life. It’s a time when we’re discovering who we are, what we think, and how we feel about ourselves and the world we live in.

I find that as the years go by I have more and more compassion for my own inner teenager, a greater respect for the experiences I had during that period of my life, and an increased desire to re-examine the events and circumstances that came to shape my beliefs and sensibilities. Like so many young people, it was a time of real hardship for me — I had problems at home and at school, my parents were divorced, I didn’t feel that I fit in socially, and I had faced some abusive situations through the years, as well. While The Way I Used to Be is a work of fiction, it does come from a place of emotional truth, and it was from a space of reflection and compassion that I wrote this book. For many people, the teenage years are often a time when we encounter loss, trauma, heartbreak, and disappointment for the first time, yet we are rarely equipped to deal with these very “adult” emotions and situations. When we don’t have the help we need, or we don’t feel empowered and supported — particularly in the face of extreme and potentially damaging experiences of violation, such as rape or abuse — the underlying problems are often forced to work themselves out in unhealthy, destructive, and dangerous ways that, in fact, never really do allow us to reach a resolution.

It is this dilemma I wanted to show unfolding in the life of my main character, Eden — a young girl who had always felt safety in anonymity, comfortable existing in the background and content to let other people call all the shots. It’s only after Eden is raped — and desperately needs to be seen and heard — that she understands she had let herself become invisible, living like a ghost in her own life. She knows she cannot go back to the way she used to be — nor does she even want to, she realizes — but because she lacks the self-possession and support to deal with what has happened, her need to claim ownership over her life plays out in a downward spiral.

The one message I hope shines through this story is the simple yet elusive lesson that takes Eden so long to learn: She is worthy — and she always was worthy — of speaking out, standing up for herself, and demanding to be seen and heard. Sexual violence is an epidemic, and while I don’t claim to have all the answers, I do know that silence is also a force of violence. When left unchecked, it can and will wreak havoc, not only in the life of its victim, but in the lives of everyone that person touches. Portraying the dangerous nature of silence was one of the major goals I set for myself at the outset of this book’s conception. It is my hope that readers might recognize aspects of Eden’s struggle reflected in their own lives or in the lives of those closest to them. That something in this story might urge them to approach those relationships with a greater degree of respect, validation, and compassion — a stance that could go a long way to help spare some of the destruction and heartache we witness in Eden’s journey from victim to survivor.

Above all, I wrote The Way I Used to Be with the hope that it might inspire, in even a single person, the transformative power of finding one’s own voice, and in the spirit that there is, inevitably, light in darkness, hope in despair, and freedom in truth. 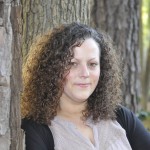 Amber Smith is a writer and artist who grew up in Buffalo, NY, and now lives in Charlotte, NC, with her two dogs. After graduating from art school with a BFA in Painting, she earned her MA in Art History. When she’s not writing, she is working as a curator and freelance art consultant. Visit her online at www.ambersmithauthor.com, follow her on Twitter @ASmithAuthor and on Facebook– www.facebook.com/AmberSmithAuthor.

One thought on “The Story Behind ‘The Way I Used to Be’: An Essay by Author Amber Smith”