As we have seen in the previous Old Hollywood posts, American cinema was slowly becoming diverse by featuring actors and actresses of various backgrounds. This month we look at the life and career of the German- 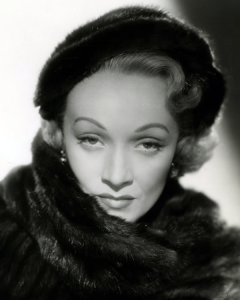 American actress Marlene Dietrich, who was the first cinema star to challenge the idea of femininity in her personal and Hollywood appearance.

Marlene Dietrich was born Maria Magdalene Dietrich on December 27, 1901, in Berlin, Germany. Growing up, she took French and English language courses and violin lessons because she wanted to become a professional violinist. During her teenage years, however, she traded music for acting and studied at Max Reinhardt’s drama school. She soon began having small roles in plays and German films. Unfortunately, Dietrich’s family did not approve of her interest in acting. Because of this disapproval, she changed her identity by merging her first and middle name to become Marlene Dietrich.

It was during the 1920s that Marlene Dietrich’s acting career began to take flight. She took part in German cinema history when she was cast in the country’s first talking film, Der Blaue Engel (1930) by Hollywood director Josef von Sternberg. She appeared with the same cast in the English version, titled The Blue Angel, and her role as the nightclub dancer Lola Lola and the film’s success made Dietrich a star in the United States.

After the 1930 release of Der Blaue Engel in Berlin, Germany, Dietrich moved to America, where she worked again with Hollywood director von Sternberg — this time in Morocco (1930). In this particular movie, she played a singer who was caught in a love triangle with Gary Cooper and Adolphe Menjou’s characters. It was her role in Morocco that earned Dietrich her first and only Academy Award nomination.

Although her two successful film roles were considered seductive and “femme fatale,” Dietrich challenged the femininity norms by often wearing pants both on and off the screen. It was not common for women to wear anything besides dresses or skirts because it was considered manly, but this did not stop the rising star from wearing pants and other masculine attire to create her genuine image.

On March 6, 1937, she officially became a US citizen, and by the end of World War II, she entertained American troops in North Africa and Europe. She went on to play roles alongside John Wayne in the films Seven Sinners (1940), The Spoilers (1942), and Pittsburgh (1942). Wayne and Dietrich were rumored to be in a romantic relationship that turned into “a strong friendship.”

She was often given the roles of streetwalkers and was typecast as the woman with low morals, but Dietrich wanted to play other characters. The opportunity to play a different role came with the film Destry Rides Again (1939), in which she played Frenchy, a Western saloon hostess. More movies came along in 1942, including Manpower, The Spoilers, and The Lady Is Willing. 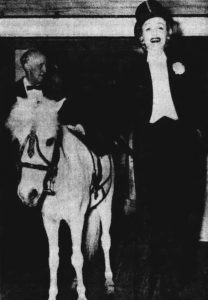 Aside from her Hollywood life, Dietrich’s personal life included being married to Rudolf Sieber in 1923 and giving birth to their daughter, Maria Elizabeth Sieber, in 1924. She was a strong opponent of her homeland’s Nazi government. When she was asked by associates of Adolf Hitler to return to Germany to make films, she declined. Consequently, the films in which she appeared were banned in Germany. Besides entertaining American troops overseas, Dietrich worked on war bond drives and even recorded anti-Nazi messages in German for broadcast.  She published her autobiography, Dietrich ABC, in 1960.

By the mid-1950s, her film career was fading, so Dietrich switched to singing, and she toured around the world with her act. She fractured a leg during one of her performances, so she stopped performing overall by the 1970s and moved to Paris. In the 1980s, she voiced a documentary made about her by director Maximilian Schell. The last 12 years of her life were spent in bed.

Marlene Dietrich died in her sleep on May 6, 1992, and she was buried next to her mother in Berlin, Germany. Her career has 55 film credits and 70 soundtrack credits to her name.