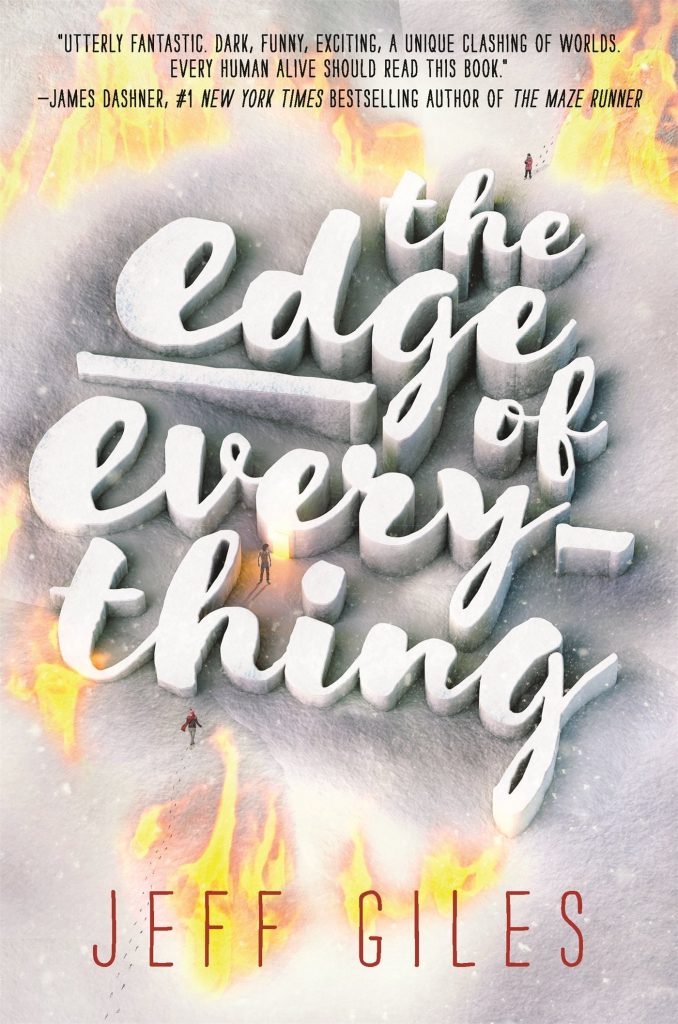 Jeff Giles, author of The Edge of Everything, brings readers a story filled with intensity, romance, and revenge. Told through the perspectives of two witty and edgy characters, Giles provides plenty of dangerous, thrilling, and unexpected moments in a novel that is unlike anything else available on the shelves today. Grab a copy of The Edge of Everything on January 31st, and follow Zoe and X as they fall in love and discover buried secrets that could shatter both of their lives and their relationship.

What first inspired you to write The Edge of Everything?

For a long time, I’d been amazed by all the beautiful, diverse, engrossing YA novels in the world—and by how devoted the readers were. One day, when I was working at Entertainment Weekly, an opening scene popped into my head: A 17-year-old girl named Zoe is going into a blizzard to find her little brother and their dogs when she stumbles on two men fighting on a frozen lake. One of the guys is trying to drown the other in a hole in the ice. Zoe doesn’t want to see anyone die that way—so she gets involved, and it changes her life.

What steps did you take to create a story that combines both the modern world and the fictional place known as the Lowlands?

Even though there’s a lot of fantastical stuff in the novel, I wanted the parts in the real world to feel as realistic as possible. For the part of the book where Zoe goes caving, I talked and emailed with expert cavers and did some exploring with a high school caving club. As for the Lowlands, I wanted my version of Hell to be a massive prison in the center of the earth. So I read all kinds of literature and journalism about prisons. I studied photos and thought a lot about what would make for the MOST lonely, hopeless, spirit-killing place. I liked imagining people from different centuries living next to each other and trying to communicate and even forming friendships.

Why did you choose to transition from editing for Entertainment Weekly to writing a novel of your own? How do the two jobs compare?

I had edited other people’s articles for a long time, and I loved it, but I really missed writing. I had no idea if I could invent characters or if I could write something scary or romantic or funny. I wanted to find out. Writing fiction is really solitary and sometimes lonely, and I eat MANY more snacks now, but when the writing is going well—when you’re in a groove and proud of what you’re doing—it’s incredibly fulfilling.

What has been your funniest or most interesting memory so far as an author?

I loved going to BookCon last year. I couldn’t believe how welcoming and kind even the best-known YA authors are. I moderated two panels, so I got to meet some amazing human beings: Jennifer Niven (I mean, who’s cooler than her?!), Sabaa Tahir, David Arnold, John Corey Whaley, Victoria Aveyard, Laini Taylor, and Sarah J. Maas. Seeing the passion in the audiences—the laughter, the excitement, the great questions—was amazing. Like I said, I’ve interviewed a lot of famous actors, and they were NEVER as cool as the YA community.

If you could choose one movie or book to live in for the rest of your life, which would it be, and why?

Cool question! I love Kerry Kletter’s debut YA novel, The First Time She Drowned. It’s so beautifully written and so deeply felt. I wouldn’t want to live in the story because it’s heartbreaking at times, but I WOULD like to shrink way, way down and walk around all those gorgeous sentences and gaze at them a while.

As I read the author blurb on the back of The Edge of Everything, it stood out to me that you were able to be an extra in the film The Return of the King. How did you come about getting this opportunity, and how would you describe your time on set?

Being an extra was a blast, and the weird thing is that the director, Peter Jackson, ASKED me to do it. I’d interviewed him for Newsweek magazine, and he wanted me to get a different perspective on filmmaking by actually standing there in a costume and makeup and having a camera pointed at me. All the other guys playing Rohan soldiers had long, flowing hair and beards, and I didn’t, so they give me a sort of chainmail hoodie and glued yak hair to my face so I’d have a beard and mustache. I remember going to the men’s room at one point, looking in the mirror and thinking, “Who is THAT?” I was in the background during a couple different scenes. For one of them, Peter told us all to look really confused and upset. I did the best I could, but they wouldn’t let me wear my glasses, so I was squinting through the whole thing. Peter came over at one point—he’s a really great, funny guy—and told me quietly, “You look silly.” He and his cowriters teased me afterwards. One of them sent me an email saying that Peter had decided to fire Viggo Mortensen and have ME play Aragorn instead.

What books or other forms of pop culture have influenced your writing the most?

A couple of old movies were stuck in my head the whole time I was writing The Edge of Everything. They’re totally different, but they’re both great “fish out of water” stories: Witness, with Harrison Ford, and Edward Scissorhands, with Johnny Depp. I love Witness because it’s about a tough, city policeman coming to understand/respect/love an Amish community. His first impulse is always violence, but they teach him a different way. (By the way, Witness is rated R, so, unless you’re 17, don’t tell your parents I said you should watch it.) Edward Scissorhands is just a joy from start to finish, but the humor of the movie is what stuck with me—the idea of this fairy-tale-type guy showing up in a boring suburb and freaking everybody out. Both movies influenced my novel.

Are you currently working on another novel? If so, what details (if any) can you share with readers?

I’m writing the sequel to The Edge of Everything now. It’s about the bounty hunter, X, searching the Lowlands for his parents and Zoe going to really dangerous lengths to help him. I’m making sure to write juicy parts for the characters that people are telling me they like most in the first book.

Finally, what advice do you have for teen writers or journalists?

Don’t be shy when you write. Dig deep. Writing is a way to find out who you are and to put your creativity, intelligence, pain, and weirdness to use. Writing wants ALL of you. Two more things: turn off the WiFi when you work, or you’ll never get anything done, and make sure you have a ton of chocolate in a drawer.

One thought on “Jeff Giles: Writing, Lord of the Rings, and Exciting New YA Fiction”